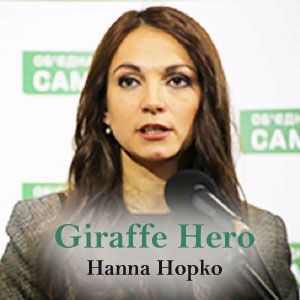 You start by building your credibility: You get a Master’s Degree in International Journalism and a Doctorate in Social Communications. You become an ecological journalist, conducting trainings, speaking at conferences, and heading up governmental and non-governmental committees. You publish articles and appear throughout the media. You take over as the Communications Manager of the Ukraine Citizen Action Network. You act as the Advocacy Coordinator of Ukraine’s Campaign for Tobacco-Free Kids. You co-found and take the office of Deputy Director of the Regional Advocacy Center. You join the board of the Anticorruption Action Center. And you coordinate the “Reanimation Package of Reforms” (RPR), dedicated to ridding the country of corruption, and redrafting national laws to create free, fair, and honest government.

You also put your life on the line. You join with other Ukrainian citizens in a massive protest against the corrupt and unresponsive regime of President Victor Yanukovych and his efforts to pull the country back from a closer association with the countries and economies of Western Europe. Yanukovych flees the country, but not before his gunmen kill many of the protestors. Your car is destroyed, and you receive threats on your life.

Nevertheless, you begin your next work, leading RPR in directing the energy and ideals of the protests into actual legislation. In RPR, you’ve amassed a group of highly qualified people from universities, the media, think tanks, and other civic groups who are less concerned with political parties than with fostering democracy. Within months, you’ve brought in over 200 experts and 50 civil society groups.

Hopko’s enterprise looks promising, and she’s won over converts, including important politicians. As Hopko says, “We’re asking all the leading politicians and candidates to make a public commitment to support RPR’s reforms. We have to use them before it’s too late. The system is attacking us, so we fight back.”

She and her RPR allies draft, prepare, and promote legislation, and they’ve been successful. They’ve pushed through one law preserving the independence of public broadcasting, another law granting more autonomy to universities, and still another law against corruption in the appointment of judges. In all, ten laws pushed by RPR have been adopted by the Ukrainian Parliament. Hopko knows that every little change helps: “Democracy is not the end; it is an ongoing path.” With each success, the RPR gains more and more public support and confidence for systemic change. Understanding that it must offer an inclusive dialogue for all parts of Ukrainian society, Hopko and other RPR leaders tour the country to encourage support for reforms.

The revolution continues, and the danger, if anything, has escalated. Currently, there is warfare on the eastern border areas between the government of Ukraine and separatist militias supported by Russia. Hopko and her colleagues believe that the best defense against both Russian interference and internal rebellion is a strong, vibrant democracy that can earn the allegiance of all of Ukraine’s people. She knows that without substantial reductions in corruption, no Ukrainian government can win the confidence of the people—nor convince the nations of Western Europe to open their economic doors to Ukraine. And unless broader reforms can create a transparent, just, inclusive national government, those now rebelling in east Ukraine will not see why they should align with their fellow Ukrainians rather than aligning with Russia.

“This crisis is not about ethnicity or geography,” Hopko says. “It’s about hope. One side says we can fix our problems ourselves; the other side yearns for the stability of the old Soviet Union, when all the rules were set for us. The first side must demonstrate to the second that the fixing is possible, that the people, together, can create a stable and just country."

Find out more about Hanna Hopko on her Wikipedia page