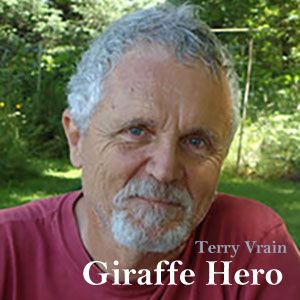 “When we started with genetic engi­neer­ing in the 1980s, the sci­ence was based on the the­ory that one gene pro­duces one pro­tein. But we now know, since the human genome project, that a gene can cre­ate more than one pro­tein. The inser­tion of genes in the genome through genetic engi­neer­ing inter­rupts the cod­ing sequence of the DNA, cre­at­ing trun­cated, rogue pro­teins, which can cause unin­tended effects. It’s an inva­sive technology.”

Why is this important? It’s important because these days many common foods are “genetically engineered” to increase crop yield and to become more resistant to insecticides, both laudable goals. But many people, including Vrain, now believe that the “rogue proteins” being used are potentially unhealthy and even dangerous to anyone who eats those foods.

Thierry Vrain knows what he's talking about: He’s a former genetic engineer himself, with a doctoral degree in plant physiology. He worked for 30 years as a research scientist for the Canadian government, genetically engineering small fruits and potatoes, and directed the biotechnology department at British Columbia’s Pacific Agri-Food Research Centre. The Vrain of the past was the kind of scientist the Vrain of the present is arguing against.

When Vrain retired to a small farm, he started to read about gardening and agriculture from a broader perspective. He also began to learn as much as he could about organic farming. And he read up on the most recent published studies that questioned the impact and safety of engineered food. Vrain decided that genetically modified organisms—GMOs—were not the boons they were made out to be; they were not “as safe as water,” as they’d been advertised. His conclusion: “I refute the claims of the biotechnology companies that their engineered crops yield more, that they require less pesticide applications, that they have no impact on the environment, and of course that they are safe to eat.” He began to give talks informing people about the negative research. Because of his credentials and his experience, he's highly credible.

Vrain’s conversion is not without risk, of course: He’s going up against huge multinational corporations. As he says, “If you are a sci­en­tist and dis­cover things that are of con­cern, then you are accused of doing ‘pseu­do­science’ and often viciously attacked by the indus­try and aca­d­e­mics on the pay­roll.” Vrain says that many scientists who still support GMOs are in the employ of biotech companies or of academic institutions supported by those companies; they aren't likely to rock the boat.

Today Vrain is presenting what he knows about GMOs all across Canada, the U.S., and throughout the world. When he's not giving a talk somewhere far afield, he's home on his British Columbia farm. It's not only a working farm, it's also an educational center offering workshops and community programs on organic gardening, permaculture, and nutrition.

On the road and on the farm, Thierry Vrain is definitely on a mission, spreading the word against the products and philosophy that he promoted for decades.

“It’s my retirement project,” he says. “I say I’m atoning for my sins.”