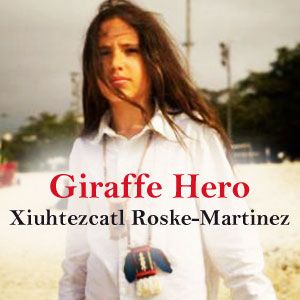 Xiuhtezcatl Roske-Martinez loves the outdoors. Maybe it’s the Aztec genes passed on through his father’s side of the family; maybe it’s the environmental activism modeled by his mother. Or maybe it’s just that the forest around Boulder, Colorado, is stunning, and Xiuhtezcatl has grown up loving it.

Whatever the reasons, when he was only six years old, Xiuhtezcatl realized that something was happening to his forest, and that something wasn’t good. It was getting warmer, the trees were dying, the logs were feeding huge fires, plant growth was disappearing, and species of animals were becoming endangered.

The changes are so real and so serious that 6-year-old Xiuhtezcatl gave a speech at a rally that was organized to make people aware of the human causes of climate change. It's not abstract for him, and his up-close and personal familiarity with the forest holds him in good stead with climate change-deniers, as well as others who may deride him for being overly concerned. “The proof,” he says, “is right in front of us. This is happening now, this is happening here, and this is real.”

Xiuhtezcatl has been working for the environment ever since that first speech, particularly as the voice of the Earth Guardians, a nonprofit environmental group for youth.

He has helped to organize dozens of rallies, marches, presentations, and other events.

He's worked with officials from the city, county, state, and U.S. government, and he’s collaborated with over 50 environmental organizations.

He started and performs with a music group called Voice of Youth, for which he writes original music and lyrics to educate people about environmental issues.

Imagine the guts it must take for a boy of 12 to deliver an address to a mayor, or a U.S. Senator, or a throng of hundreds. But Xiuhtezcatl is motivated: “I am on a mission to bring the awareness of our environmental and climate crisis to my generation.”

Xiuhtezcatl’s message is simple: “We deserve to have a say in the kind of world we are going to inherit. Youth are innovative and have a clear understanding of the environmental crisis and what it will take to turn things around. We have a powerful voice, and people are listening.”

It’s more than education, of course: It’s getting people to take action. Xiuhtezcatl is only too aware that he’s too young to vote and that he has to depend on adults to make substantive changes: “It’s really important,” he points out, “to let people know that instead of just knowing what the problem is and feeling terrible about it, you know what to do about it.”

And that could be a good working definition of an activist.

Keep up with his work at www.earthguardians.org