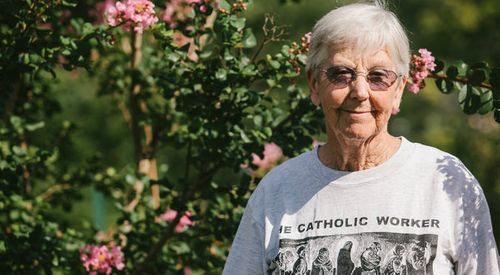 A Lifetime of Heroism

This is Sister Megan Rice, a nun for most of her 80+ years and a peace activist since the 1980s. She had been arrested more than three dozen times and had done time twice when she and two other peace activists performed what was called the most serious security breach in the history of US nuclear facilities. They cut through fencing at the "most secure" of all US nuclear weapons plants, walked over to its Highly Enriched Materials building, then hung anti-war banners and painted quotes from the Bible on its walls. They sat down, sang hymns, and waited two full hours before Security guards figured out something was amiss. Convicted of "sabotage," Sister Megan won't be out of prison until she's 87. But she certainly proved that the facility's daunted impregnability is a lie. If a "little old lady" can get in that easily... Point taken, Sister.