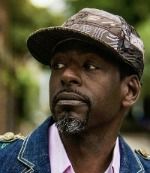 Ron Finley is a fashion designer who lives in a part of Los Angeles described as a "food desert" for want of access to fresh produce. Finley eyed the barren traffic median in front of his house and what he saw was 10 by 150 feet of potential vegetable garden. He started digging, planting and harvesting. But what the city saw was illegal use of public property, never mind the public value of all the fresh produce Finley was giving away. When he was fined and ordered to undo his work, Finley called the press. Good sense prevailed and Finley's now got people doing "dig-ins" all over the city, even in other traffic medians. Let the good food grow!