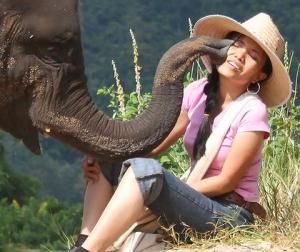 Sangduen Chailert, known as "Lek," puts in 18-hour days caring for sick and injured elephants in a protected reserve she co-founded, the Elephant Nature Park in northern Thailand.

The dwindling elephant population is a world-wide concern and Chailert is in the thick of saving them in her country. Doing so has endangered her own safety: She campaigns against "crushing," the stabbing, beating, and starving that handlers do in order to "tame" an elephant. This has earned her the enmity of officials in the government; Thailand's economy counts on tourism, and when foreigners are informed about how the elephants they see are being mistreated, Thailand loses some of its "romantic" image.

The Park, and Chailert herself, have been subject to harassment, raids, and threats. In 2012, employees of the Park were interrogated for over 13 hours by dozens of armed officials investigating an "anonymous" complaint that 70 wild elephants were being abused there; the complaint was baseless, and probably fabricated.

Despite such incidents, Chailert continues to speak out about how animals--particularly elephants--are treated throughout southeast Asia. As she said at the time of the raid, "We will do whatever possible to protect our elephants. Today I prepare to go to jail, but the fight for my animals and justice will never stop."