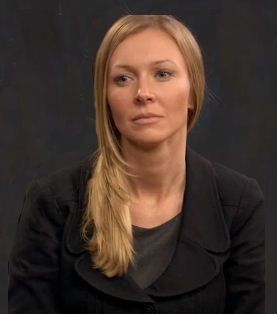 She Sounded a Warning

When she was fresh out of law school, Canadian Alayne Fleischmann got a really prestigious job, one that looked like the first step in a successful career. She was hired by a multi-billion-dollar, multi-national bank to analyze acquisitions and make sure they were high-quality.

Doing her job, she began to see deals coming in that were anything but high-quality. Mortgages sold to unqualified buyers were being bought up and re-sold to the bank's customers as good investments. Fleischmann analyzed the deals as low-quality, high-risk and was told to never report such a thing via email or on paper. She was alarmed; her boss wanted no records.

The young attorney kept doing her job, finding more and more dubious deals being made and saying so, with increasing concern. She was fired.

When the exact kind of deals she had challenged tanked the US economy and became the subject of a federal investigation, Fleischmann was not a witness; she had signed a confidentiality agreement when she was fired. But watching, month after month, as not one of the bank executives who had led this enormous theft from customers and investors was arrested, she broke the gag agreement she had signed.

She went public in the media, detailing the bank's refusal to stop making the deals she had analyzed as worse than bad. "How is it possible," she's asked repeatedly, "that you can have this much fraud and not a single person has done anything criminal?"

We honor Alayne Fleischmann for trying to stop what became a world-wide economic disaster and for risking her own career to make a public call for justice. She's been unable to find a new company that wants to hire a whistleblower.