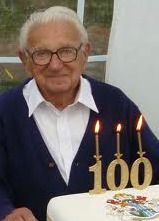 And now the oldest Giraffe commendee ever, Nicholas Winton. In 1939, the then young Brit identified Jewish kids in Czechoslovakia who were in danger of going to death camps. He forged documents, raised money, recruited British families to take the kids in, and got 669 of them on boats to England. Winton never said a word, not even to his wife, who decades later discovered his notebooks about the rescue. Below, you can see him on his much honored 100th birthday. He's now 103. And he's Sir Nicholas, honored by his nation, his queen and the hundreds of people who now know who to thank that they're alive.