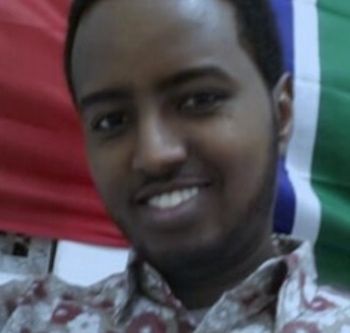 Summary: Driven by his passion to serve, Abdikadir Khalif Mohamed, a refugee from Somalia to South Africa, has defied threats and financial constraints to serve his community and his new home. Through the Somali Association of South Africa in the Western Cape province, an organization which he leads, Mohamed promotes social cohesion, integration, and a culture of self-reliance among immigrants, refugees, and local South Africans.

Profile: Abdikadir Khalif Mohamed left Somalia in 2001 at the height of a bloody civil war. When he arrived in South Africa the next year, it was welcoming and stable. But about 10 years later the situation became tense and volatile, characterized by sporadic anti-immigrant violence, attacks on foreign-owned shops, robberies, and the systematic killing of foreign business owners, mostly of Somali origin.

Besides recognizing the disadvantaged position of immigrants and refugees in South Africa, Mohamed also noticed the potential contributions of this vulnerable group. He started to volunteer his time as an interpreter (Somali to English, English to Somali) at hospitals, police stations, clinics, and government departments. But eventually he did much more.

Through SASA, Mohamed currently provides direct emergency assistance and conducts training workshops to equip refugees, immigrants, and locals with life skills such as computer literacy, sewing, literacy, and numeracy—for children as well as adults. For example, Mohamed runs an English school where non-English speakers, mostly immigrants, are taught basic communication skills to prepare them not only for the job market but also to make their integration into South Africa, where English is a basic language, effective. Also, whenever there’s an outbreak of xenophobic violence, SASA swiftly moves in to transport people to safer places.

Though his organization bears the name “Somali”, Mohamed’s projects have benefited the majority of people living in South Africa regardless of nationality—Ethiopians, Somalis, Sudanese, Congolese, Bangladesh, Ethiopians, and South Africans, among others. In 2015 he launched a skills-sharing campaign, bringing together migrant entrepreneurs and South Africans in order to promote social cohesion, business linkages, and conflict resolution. The project identified Somali experts in business management to offer lessons on business development and financial discipline to young South Africans. Facilitated in poor communities, the skills-sharing program has helped to improve lives among local South Africans.

In the same year, Mohamed started community dialog meetings in Khayelitsha, Kraaifontein and Nyanga—areas historically known for anti-immigrant violence—to help bring foreign nationals and locals together. Today, the majority of locals understand why foreign nationals come to South Africa and have an appreciation of the socioeconomic reality. This has helped to combat mistrust and suspicion between foreign nationals and locals. As a result, the perception that immigrants are taking jobs for locals is gradually fading. This could be the reason why, of all the regions of South Africa, Western Cape is less hit by xenophobic violence.

SASA also seeks to achieve integration through sports. In 2016 Mohamed formed the Ubuntu Football Club, which consists of players from various countries playing against local teams. This approach has managed to ease tensions and build a spirit of brotherhood among different nationals. The Ubuntu Football Club has won a number of awards in recognition of the club’s commitment and relevance in the South African community.

Mohamed’s work inevitably involves criticizing politicians for policies and laws that harm refugees and immigrants. Criticizing those with power and money in South Africa can be dangerous, and many activists have fallen victim. But Mohamed soldiers on, driven by his passion to serve.

‘We get threats all the time when we are doing this kind of work,’ says Mohamed. ‘You criticize leadership, you get people saying we don’t like you because of your work, but because of passion I continue. I remember in 2013 in Khayelitsha, we were threatened right in front of the advisor to the police minister. Provincial police leaders and some community leaders were there. A guy from the crowd threatened to kill me. He said, ‘I will cut your neck off if you don’t keep quiet.’’

Despite the threats, Mohamed believes, like Nelson Mandela, that there can be no greater gift than that of giving one’s time and energy to helping others without expecting anything in return.

As he says, ‘I am passionate about helping the vulnerable, disabled, and weak people of all races and nationalities.’

Like a giraffe sticking its neck out, Mohamed continues to serve his community. He has received a number of awards for his outstanding commitment and dedication to peace and harmony. In 2016 Mohamed was among only six people in South Africa to win the Mkhaya Migrants Awards to recognize non-nationals for the dedication and commitment to the socio-cultural and economic development of the country.