Musharraf Hussein is an imam in Nottingham, UK and a strong public voice for respectful coexistence among all faiths, and against extremists within Islam who recruit young Muslims to be terrorists. To Muslim extremists, Hussain is a marked man. For his courage, he is also a Giraffe Hero.

GHI has been working with Imam Hussain since 2010, when Giraffe Heroes International and the Karimia Institute launched a joint program to defuse the disaffection and anger of many Muslim youth in the UK and replace it with a growing sense of competence and hope as citizens of their adopted country.

There are over three million Muslims in the UK and half of them are under 25. Most of them live in abysmal social and economic conditions, made worse by a confusion of identity and a lack of teachers and role models. These multiple deprivations lead to a sense of alienation and victimization that then breed anger and frustration which make the kids easy prey for the recruiters of radical Islam.

The situation of young Muslims in the UK has become a growing social and security threat. Many of them applaud the violent tactics of al Qaeda. Almost all of South Asian descent, the most radicalized of these young Muslims can end up in training bases in terrorist safehavens in Pakistan. Mainstream Islam in the UK does not condone terrorism, condemns the violence of al Qaeda and urges UK Muslims to participate as full citizens of Great Britain. Politically moderate UK Islamic organizations, such as the Karimia Institute based in Nottingham, struggle to counter the influence of radical clerics among Muslim youth.

The Karamia Institute is a politically moderate Muslim organization whose mission is “to promote moral, social and spiritual development through worship, education and recreation for today's society.” The Institute operates over twenty programs for men and women, boys and girls, including nurseries, schools, mosques, a radio station and a sports center. Its newest program is the Muslim Youth Development Project, working with Muslims aged 16-25 to develop leadership skills and encourage community volunteering.

GHP President John Graham and Imam Hussain, Director of the Karimia Institute, first met at an international conference in Switzerland in the summer of 2009. They quickly saw the possibilities for using Giraffe themes and programs to support the Institute’s work in helping disaffected Muslim youth develop confidence, self-esteem and self-belief. 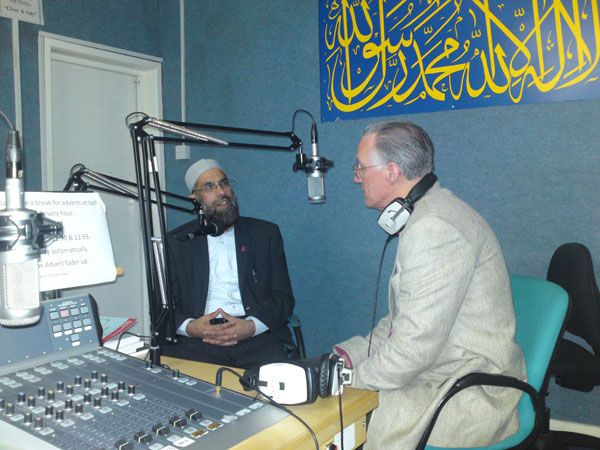 Graham and Imam Musharraf Hussain on the Air

Graham went to Nottingham in April 2010 to explore these possibilities and to work with the leaders of the Institute to design a partnership and programs that met the challenge.

It was clear from the start that Giraffe programs developed in the US simply couldn't be transferred whole to a much different cultural context in the UK’s Muslim community. While many of the same Giraffe themes and methods that work in tough inner cities in America would also work among angry Muslim youth in the UK, there were important differences. And the heroes chosen as examples for Muslim youth in the UK clearly needed to be weighted heavily towards Muslims and South Asians.

Over four days, Graham trained Karimia Institute staff to set up a system to solicit nominations for real heroes from the Muslim community, select the best stories, then get those stories told by whatever means would be most effective, including Radio Dawn, the Institute's own station.

The strategy was that, given credible examples of real heroes in their own community, Muslim youth could be coached to become heroes themselves—designing and carrying out projects that help solve public problems they care about. In that process, the youth would see the positive differences their actions could make and they would learn that they are valuable members of their society. At the same time, their communities might then more readily see them as assets instead of liabilities. Inspiring young Muslims with Giraffe Hero stories can give the kids confidence and skills. Perhaps most importantly, it can give them hope.