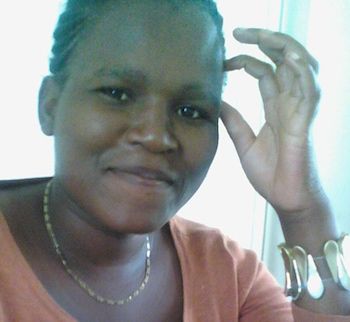 Summary: Abigale Mupambi is one of the few women activists to overtly campaign for the preservation and implementation of Zimbabwe’s new Constitution. She has braved many threats to her safety in order to call out President Mugabwe for his lack of support, and she has traveled throughout the country to urge citizens to become familiar with their constitutional rights and to fight for them.

Profile: The Citizen Rights campaign in Zimbabwe has been a male-dominated movement over the years, with only a few courageous women taking part in leading such initiatives.

One of those women is Abigale Mupambi, the founder of This Constitution, Our Constitution, a non-partisan organization determined to defend both the Zimbabwe Constitution adopted in 2013 and the people being unfairly persecuted by the government. Zimbabwe has been stubborn to allow citizens to express their constitutional rights freely. Many activists have been assaulted and jailed whilst carrying out the freedoms of expression the Constitution guarantees.

Running her organization from Bulawayo, Matabeleland Province, Mupambi has organized workshops and led discussions in both rural and urban areas, teaching the importance of constitutionalism. She has also petitioned the government over proposed amendments to the new Constitution, citing threats to democratic reforms. And she is not shy about her aim:

“We, the people of Zimbabwe, cannot fold our hands when our Constitution is under siege. We are going to take to the streets and make it public that we are not happy with the way our Constitution has been abused by the government.”

“We have been moving around the country,” she adds, “educating citizens on the importance of safeguarding and defending the new Constitution, and this is very important for democracy. Many people in the country are not privy to the basic freedoms that are enshrined in this constitution, and we are distributing copies of the Constitution for free.”

The campaign has been dangerous. Mupambi has been threatened with arrests and beatings. One of her meetings, scheduled at the Bukawayo City Hall, had to be canceled after a rowdy mob confiscated pamphlets and other material. And she has not gotten support from the Mugabe government, which is why she urges people to “understand why we the citizens keep on making our calls and demands to the President for his attention. He is our President, too! It’s high time the President addresses genuine issues that range from corruption, injustice, police brutalities, and poor service delivery across all sectors, including health.”

With her focus on Mugabe, it is clear that Mupambi has put the future of her country ahead of her own safety. Moreover, she shows no signs of modifying that pressure: “As long as President Mugabe is still the Zimbabwean President, let it be noted that he has business with the citizens and he has to attend to that. This is our country and our welfare.”