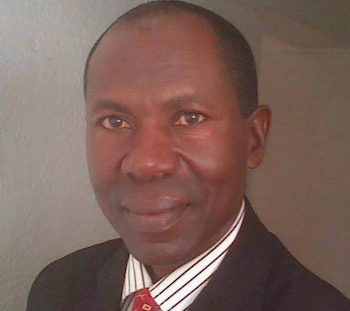 Summary: Albert Mpazayabo, a refugee from Rwanda, braves criticism, threats, and lack of finances in order to promote peaceful coexistence between refugees and locals in South Africa and especially in places with a history of animosity and violence toward refugees. At considerable personal risk and with limited resources, Mpazayabo organizes and facilitates meetings helping community members negotiated relevant solutions and create Joint Action Plans to build peaceful and cohesive societies.

Profile: It is often heartrending to be a refugee. First, you’re leaving a place you call home—a place that may be dangerous or poverty-stricken or both, but a place where you were born and have ties. And second, you’re going to a place that may not accept you—a place whose people may speak a different language, have a different culture, and, perhaps most important, look upon you as a threat.

Albert Mpazayabo knows this well. He is a refugee, and for much of his adult life he has strived to make refugees’ lives safer and more comfortable.

Mpazayabo is from Rwanda, where he worked for the Rwandan Red Cross as a senior health training officer. In the 1990s Rwanda experienced a mass genocide in which Mpazayabo’s parents were killed. Mpazayabo escaped—leaving his brothers and sisters—who still live there—and sought refuge in the camps of the Democratic Republic of Congo. When in 1995 the camps were destroyed, he, his wife, and his three-year-old son fled to South Africa.

At the time, much of southern Africa was experiencing an AIDS epidemic; refugees were especially vulnerable. Despite a great deal of negativity toward even mentioning the disease, Mpazayabo co-founded Le Bon Samaritain, which promoted community education on issues related to reproductive health care in general and HIV/AIDS in particular. This was in 2000, and, even though it was difficult to speak out, the organization helped many people.

But Mpazayabo’s true calling was refugees: He recognized their plight and wanted to do everything he could to help them. In 2010 he co-founded Rwanda of Good Hope with the goal of bringing peace and harmony among Hutu and Tutsi Rwandan refugees, two groups with a violent history. Given the highly political nature of the project, it was not long before Mpazayabo received a lot of threats. ‘Unfortunately our initiative met with increasing threats and opposition from those who had been benefitting from perpetuated social divisions among the Rwandan people,’ said Mpazayabo. In 2014, a Rwandan opposition leader was allegedly killed by Rwandans agents in South Africa, sparking a serious diplomatic row between the two countries. ‘Hence for the sake of safety of our activists,’ he continued, ‘Rwanda of Good Hope had to suspend its activities in 2015.’

That setback didn’t stop Mpazayabo. Most recently, he leads the Network for Immigrant Rights and Responsibilities in South Africa, which promotes peaceful coexistence and social cohesion. He wants governments to accept their new refugees and refugees to appreciate their new governments. ‘Whilst South Africa as a refugee host country and South Africans as host communities are opening up their doors to afford refugees a relatively warm hospitality, it is critical for refugees to show appreciation, more particularly via abiding by the law of the land,’ said Mpazayabo.

To that end, with limited resources, he travels to communities where refugees and locals live to preach his message of peaceful co-existence and social cohesion. He organizes regular stakeholder and dialogue meetings in places like Khayelitsha, Imizamo Yethu, Masiphumelele, Nomzamo, Lwandle, Asanda Village, Dunnon and Delft—all considered hot spots for crime, and xenophobia. Stories abound of community activists harmed in these dangerous neighborhoods. In 2018, a counselor who attempted to stop the ill treatment of foreign business owners by corrupt officials was shot dead in Kraaifontein.

It’s not easy, not just because of the dangers, but also because of the costs: ‘The biggest challenge I have been encountering all along in my humanitarian work,’ says Mpazayabo, ‘has always been the lack of financial support. Despite good will and good faith, without enough financial abilities the ‘fancy’ objectives would be less likely to be achieved.’

Mpazayabo’s strategy is to organize both refugees and locals under the same roof and first identify the most critical issues that have been negatively affecting socio-economic development. The next steps are to agree on negotiated relevant solutions and finally to reach a Joint Action Plan to be both implemented and sustained by all parties in their effort to create a peaceful and cohesive society. Both refugees and locals must be part of the solution.

In all this effort, Mpazayabo meets resistance, criticism, opposition and even jealousy. ‘Those benefiting from social chaos feel threatened by new dynamics intended to enhance social order. When you are involved in community mobilization you need to believe in whatever you feel is beneficial to your target audience, and keep moving forward, driven by passion,’ said Mpazayabo.

A refugee himself with a wife and four children, Mpazayabo knows no other path. Despite the multifaceted challenges, he keeps sticking his neck out like a Giraffe, to save communities from violence, and usher in an environment of peace and harmony among people of different national backgrounds. To him, his work is not only an art, but a calling. As he says, ‘Should I be not involved in community work, then I wouldn’t be myself.’