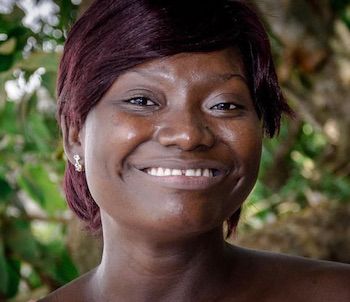 Summary: Aminata Kamara designs and facilitates programmes for girls and young women in Sierra Leone. In 2018, while working for the activist organization, Purposeful, Kamara ( was part of the team who challenged a government decision banning pregnant girls from attending school. She was verbally attacked by government officials, religious bodies, and the general public, but she never stopped her activism, and the ban was eventually lifted in 2020.

Profile: Aminata Kamara is the Senior Programme Manager for Purposeful Productions, an organization dedicated to supporting girls and young women in Sierra Leone. Kamara designs and facilitates interventions that help these adolescents in numerous ways.

Born and bred in Kenema—eastern Sierra Leone—Kamara holds a Bachelor of Arts Degree in History and Sociology and a Masters of Philosophy in Gender from the University of Sierra Leone. At a young age, she knew that she wanted to attain quality education. As a woman in Sierra Leone, she had to work hard, study hard, and persevere despite many obstacles to her success.

In 2015, a ban against pregnant girls attending school was passed after the reopening of schools following the Ebola outbreak. During the outbreak, schools had been closed down to reduce the spread of the virus. With more children staying at home, girls became vulnerable to sexual violence. In some communities, rates of teenage pregnancy increased by up to 65%.

That same year, an Amnesty International report revealed that schoolgirls in Sierra Leone were “subjected to degrading procedures” by school administrators to determine if they were pregnant, such as having their body felt or being compelled to take urine tests.

The ban on pregnant girls was contrary to everything that Kamara and Purposeful Productions fight for, and they decided to do something about it. Kamara says, “With over 50% of Sierra Leone’s population being females, and many of these women also being illiterate, limiting their access to gaining trust, finance, and influence, coupled with a ban at that time, was more than they can bear.” So in 2018 Purposeful Productions sued the Sierra Leone government at the Economic Community of West African States. A year later, the court ruled that the policy was indeed denying the girls their right to education. A year after that, the ban was lifted.

The efforts made by Kamara to champion such advocacy didn’t come easy; she encountered lots of pushback from individuals as well as social and religious groups:

“In 2018, while attending a conference with representatives of Ministries, Department, and Agencies of government, I was picked upon and verbally attacked by government officials as one of those pushing for immorality by calling for pregnant girls to go to school. A certain government officer had said to me, ‘How can you advocate for such an immoral act by allowing our kids, who know nothing about sex, to sit in the same class with pregnant girls?’”

Sierra Leone is a very traditional society and is often criticized as being misogynist. It is a nation where former President Ernest Bai Koroma declined to sign into law an abortion bill that was unanimously passed by Parliament. Many activists say that men are deciding the future of women without recourse to the women themselves. In all of this, Kamara’s focus on a level playing field for boys and girls was paramount, and she refused to be distracted. As a feminist, she believes that persecuting pregnant girls due to pregnancy, especially girls younger than 18, is akin to committing a crime against them. So, banning them from school as well meant a double jeopardy.

Kamara says that even being born female in Sierra Leone is a risk. She is frequently harassed and perceived negatively when speaking on the issues that affect girls and young women. Many antagonists, including other women, hold the view that her work influences women to do bad things or limits their chances of getting married. They see her efforts a thwarting important traditions and customs.

Unlike her opponents, Kamara is tolerant: “I don’t judge them or get angry at all, I know they speak from an uninformed perspective, and they inspire me to engage them in an effort to educating them about my work.”

Kamara’s goal is to help create an environment where girls have equal opportunity to be seen and heard compared to their male counterparts—and particularly compared to girls coming from financially stable backgrounds. She continues to dedicate her life to teach, motivate, and inspire adolescent girls through advocacy, skills training, writings, and programmes. She says that her desire is to see a world where these adolescents can overcome the challenges that limit their growth and have greater opportunities:

“Day in and day out, when an activist makes efforts or raises his/her voice to speak for human rights, it's a sacrifice on its own. But in my case, I have been able to reach out to many young girls as well as adults across Sierra Leone on how to stay positive and safe in a world categorized by teenage pregnancy, early marriage, and other forms of sexual reproductive health issues. I give up many things in favor of speaking up for girls and to make sure that my voice is heard. I have so much passion for my work, and I do not see myself making the exit door soon.”

And that is good news for girls and young women all over Sierra Leone.