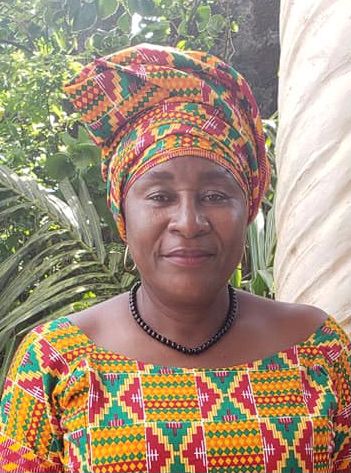 Summary: Anita Koroma is an activist, trainer, mentor, and inspirational speaker, focusing on the rights of girls. She is also the founder and Executive Director of Girl Child Network Sierra Leone (GCN-SL), an offshoot of Girl Child Network Worldwide. Despite the challenges of little funding, lack of government support, and harassment from various communities, Koroma has had positive impacts on girls and women in Sierra Leone and elsewhere.

Profile: In early 2011, Anita Koroma decided to meet the founder of Girl Child Network Zimbabwe, Betty Makoni (also a Giraffe Hero), so that she could be trained on how to begin running girls’ empowerment clubs, especially in her home country of Sierra Leone. The meeting turned out to be successful, and on 1 December 2011, Koroma officially established Girl Child Network Sierra Leone—GCN-SL. She then organized girls’ empowerment workshops in rural Sierra Leone and trained over 2000 girls to start and lead clubs in their local communities. Korona continued her organizing and eventually established 80 girls’ empowerment clubs, with over 6000 girls nationwide.

During club sessions, girls reveal, discuss, and seek counseling for abuse, molestation, and domestic violence. “Our vision,” says Koroma, “is to see girls transformed at a much earlier stage from perceived victims into leaders. Girl Child Network Worldwide is an organization that believes that if we catch girls whilst young and develop them into confident women, we are assured of a world where women can solve their problems in the home, school, and community.”

Koroma did not have millions of dollars to build empowerment clubs. What she did have was the knowledge, skills, experience, dedication, and inspiration to instill into girls the values that helped change their lives. GCN-SL continually needs the financial resources to keep this life-saving work going.

In addition to financial burdens, Koroma’s call for a halt to the abuse of women and girls, especially at the rural level, has met stiff resistance. GCN-SL argues that girls are at risk of being abused by older men if the government does not enforce the legal age for entering pubs. In October 2011, the organization petitioned the government to introduce an identity-cards system. Such a system would help protect young girls by sanctioning an age limit for children under 16 from frequenting nightclubs, pubs, and brothels.

“In such public places,” says Koroma, “we want our campaign, HOW OLD ARE YOU?, to be the right thing everyone who suspects a child to be in such places to undertake.”

However, her call for reform has been frustrated: The Sierra Leone government doesn’t seem to be listening to her campaign; for over a decade, the government has ignored the issue.

Similarly, by campaigning against female genital mutilation and sexual gender-based violence, Koroma has come under serious harassment from authorities in the local villages where she works. Recently, she partnered with Canada Fund for Local Initiative to roll out a campaign at Rolacor village in Bombali district, Northern region. The move was frowned upon by traditional “soweis”, who believe that the age-old practice of genital mutilation is sacred and shouldn’t be openly discussed.

Koroma continues to push despite the odds, and her work has been recognized. In 2022, she was named one of the 50 most influential women in Sierra Leone. She has secured other honors as well, including an Ebola medal awarded by Queen Elizabeth II.

Anita Koroma perseveres in her fight to protect girls and women, despite the lack of funding, the lack of support from the government, and the threats from local traditionalists.

Why does she push forward? “Girls have potential that must be unleashed.”