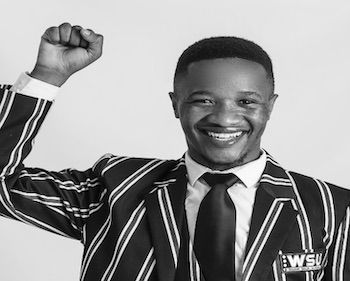 Summary: Athenkosi Fani knew he was gay from childhood, and so did others: He was mercilessly assaulted in South Africa children’s homes and elsewhere for much of his life. Rather than bend to the attacks, Fani became an activist for LGBTQI communities. In 2020, he formed the Boniswa LGBTQI Foundation and launched the LGBTQIRISE campaign to create awareness about the rights and challenges faced by LGBTQI people. Despite continued physical, political, and emotional harassment, Fani gives motivational talks, trains youth on leadership and sensitivity, and organises LGBTQI sports tournaments and awareness campaigns.

Profile: Athenkosi Fani had a difficult upbringing, but he thinks it strengthened him. Fani spent most of his adolescent years in children's homes in South Africa after his mother became ill and was unable to take care of him. In those homes he was attacked by his peers for being gay.

“I was born gay,” says Fani, “and I am proudly gay. However, this has not been easy. It has been a journey that took me many years.”

One result of living in such an abusive and violent environment as a youth was that Fani became an alcoholic and a violent young man. But he had the courage to stop taking alcohol and curb his violence after realising the dangers both posed to his life and future. Now as part of his work, Fani campaigns against alcohol and substance abuse in his community.

Fani held several leadership positions during his school days, including as a member of the Port Elizabeth Junior City Council. He was also named "Ambassador" by Walter Sisulu University for his outstanding work in upholding its values and ideals.

It was at the University, where Fani is now in his final year as a public relations student, that his advocacy for LGBTQI rights took shape and gained momentum—and he came to fully realise the extent of the discrimination and violent attacks suffered by the LGBTQI community. And it was personal. “As a first-year student,” he reports, “I was assaulted, suffering a nose injury which became severe.”

Even though both the United Nations Human Rights Commission and the South Africa Constitution forbid discrimination on the basis of sex, gender, or sexual orientation. LGBTQI communities in South Africa continue to suffer discrimination and violence. And according to research, the risk of being subjected to hate crime is three times higher in the Eastern Cape (where Fani lives) as compared to the rest of the country.

In 2020 Fani formed the Boniswa LGBTQI Foundation; the Foundation’s objective is to break the stigma and stereotypes around the LGBTQI community and to fight against homophobia and discrimination against LGBTQI people.

In the same year, Fani launched LGBTQIRISE, a campaign that encourages members of the LGBTQI community to stand up and start occupying important positions in leadership and the media.

Fani spends much of his time educating people in schools around the country about LGBTQI rights: “We aim to promote dialogue and support clubs that encourage people from the LGBTQI community to come out and share their experiences.

And Fani’s work doesn’t stop with LGBTQI communities. He also challenges policies, social norms, and practices that are oppressive and undemocratic to anyone:

“I have done a lot not only within the LBTQI community but in the entire community, from helping students facing financial exclusion to promoting proper service delivery. I have shown people that they have to be the change that they want to see in the community. . . . I believe that I am also changing a perspective or rather a narrative that we cannot wait for things to happen but we must make things happen.”

People have taken notice. Fani was selected to represent South Africa at an International Youth Conference in New York, and local officials have responded—sometimes positively, other times negatively—to his campaigns.

The verbal and physical assaults have become a way of life for him. In one instance, Fani was beaten up when he tried to stop someone from attacking the person’s girlfriend: “The guy told me that he cannot be stopped by a gay guy like me who was weak.” But I was the one who was stopping him because other men around were too scared to do so.”

In spite of the persecution, and sometimes because of it, Fani has remained resolute: “I keep on pushing beyond boundaries and not being scared because fear won’t allow me to be the change that I want to see,” he says. “So I need to make sure that I won’t allow the norms of the society to tell me what is wrong or what is right. I know what is right; I also know what is wrong. I believe that we have a right and a responsibility to act without feeling that other people are superior to us.”

Fani’s attitude toward politics is resolute. “When someone comes and does something rare, it’s questioned,” he says. “I tell myself that I’d rather not focus on the noise but focus on the plan, and the plan is to see change in my community or wherever I am. And not to look just at current events but to challenge policies and the culture that are wrong in our society at large.

“I am a person who challenges policies. I don’t let things go.”