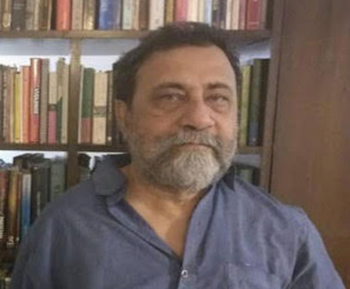 In 2013, academic historian Dilip Simeon, an activist who has always advocated for peaceful, non-violent solutions to disputes, was savagely beaten by six men on his way to work at Ramjas College in Delhi, India.

For weeks he had been part of a student and faculty effort to secure fair wages for a low-wage employee of the college, a change rejected by the principal. There had been a peaceful hunger strike, and a complete shut down of classes. Then the attack on Simeon, who was leading the campaign.

From his hospital bed, where he was recovering from multiple fractures, Simeon sued the principal for attempted murder, sure that the man had sent the attackers to kill him. The entire faculty and student body coalesced against the principal, and he was sent on indefinite leave by the governing board.

Undaunted by his brush with hit men, Simeon went on writing and speaking about civil discourse and non-violence. His writings and commentaries are well known in India, and he's been a visiting scholar in colleges across Asia, India, and North America.

Simeon is chair of the Aman Trust, an effort that takes “a proactive role for civil society in the reduction of conflict and the mitigation of its effects." Its philosophy is based on the concepts of ahimsa and samrastha (nonviolence and harmony). Aman sponsors a number of programs aimed at “strengthening social institutions and resources for the anticipation and prevention of conflict.”

Simeon’s work resonates with a wide variety of people. As he says, “Truth does not have a class character; nor do grief, brutality, and conscience. . . . Some things are neither Hindu nor Muslim, neither proletarian nor bourgeois.”

The truth Dilip Simeon speaks crosses all such divides.