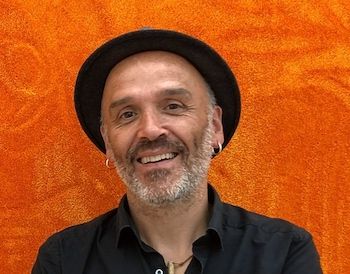 Dimi Dumortier (born 1966 in Brecht, Belgium) has many hats‘: the artist, the activist, the film maker, the social worker/psychologist, the musician and, yes, the actor. Well, he is that type of person, distanced enough from his ego, to see life as a big ‘act’ in itself…..

Above all, I guess, he is an independent soul who refuses to be put into any one ‘box’, but is always in search to bring meaning to what we are doing.

As an artist he made a point to create works in the medium “Dirt on Soap”, symbolizing the discrepancies between – well, the Dirty and the Clean; it earned him a reputation; but he probably found that dirty and moved on.

For some fifteen years he took on the job as a juvenile convicts’ rehabilitation marcher for Belgian non-profit-organisation Alba: doing thousands of kilometers of hikes with criminal youngsters, many of them who found a way back into society as result from that experience. Certainly, it was helpful along the way that Dimi is an excellent multi-instrumentalist and singer alike. – His success with this ‘therapy’ led to his advisorship for Seuil, the French charity set up by the writer and fighter for a better society, Bernard Ollivier; Seuil is now a leading institution in France offering hiking programs for youth’ rehabilitation.

Today Dimi works for a government charity counseling suicidal youths and adults alike: he and his team are open to discuss all and everything and those in need may contact 7/24.

Formation as an artist:

· 2010: Zonlight, Solo exhibition in Huis Hellemans in Edegem (B) Out to Lunch, Group exhibition in Art Base in Brussel (with Geert Nys, Jos Caes and Paul Horemans) (B)

· 2011: Desert Rock, Solo exhibition in Ruimte Belangeni in Berchem (B)

- in 2012, I co-directed the documentary 'Ik dus naar Compostela', which gathered testimonies of several youngsters who did 2500km walking hikes in Europe with the ngo ALBA. This NGO had been my employer for 15 years. In 1996 I started my first long hike (4 months), from Leuven (Belgium) to Santiago de Compostela (Spain) alone with two 16-year old boys from juvenile prison. In 1998, I did a second walk with two other boys, this time from Bucharest (Romania) to Leuven (Belgium). Two years later I was asked to urgently take over a third hike with two boys, again to Santiago de Compostela. I was given three hours to take a decision that put a claim on the next four months of my life and on my relationship. Tine, who is now my wife, didn't have to think that long. It took her exactly 15 seconds to respond: 'Of course you must go!'.

Along the way, I developed a strong bond with all of the boys. Some had committed crimes, some were drug addicts, some had problems controlling their aggresssivity. But the daily act of walking with a 18kg backpack, not knowing where we would sleep or what we would eat, created a mutual respect and friendship I have seldom felt in life afterwards.

- Also in 2012, I dressed up as a soldier of Napoleon's army and -together with my friend Karsten De Vilder- I walked 1000 km from Moscow to Vilnius. This walk was a commemoration (exactly 200 years after Napoleon's retreat of Russia) of all the casualties of 1812, an effort to brotherly unite Russian and European minds, looking at the past to make a better present. In one year time, I had learned enough Russian to interview all the people who welcomed us on the way. It took us three years to edit the surreal documentary World's Smallest Grande Armée about our adventures. By then, I had forgotten most of my Russian vocabulary. During the process of editing, it was with great bewilderment that I watched all those conversations I had had with Russians along the way. Was I really that strangely babbling weirdo with his mustache and his funny uniform?

- In October 2014, my friend Rik Merchie and I heard rumours that Italy would stop its Mare Nostrum rescue operation, although they were able to rescue more than 150,000 refugees in the Mediterranean in 2013. We decided to bring refugees and activists together under the name Pozzallo Pirates, and to prepare an action that would draw wide attention. On the night of 2 November (Christian day of the deceased) we secretly placed 18 coffins along the tide line on the beach of Ostend. The 18 coffins symbolised the 18 refugees who drowned in September that year and were buried in Pozzallo, Sicily. The action was all over Belgian news during that and the following days. The documentary Pozzallo Pirates is a registration of the 'making of' of this action, and contains several emotional interviews with refugees. Rik's name appears as director of the docu, but it was actually a very close collaboration between Rik, Karsten De Vilder and me.

- In 2018, my employer De Wissel asked me to initiate 'Open Heart Circles' in our province (Vlaams-Brabant). It consists of a direct helpdesk for alarming situations concerning youth and psychic need, especially related to suicide. Not only do we listen to the troubled persons on the phone, but we organise a 'talk circle' for the family members. This circle takes place within a week, which is very unusual in Belgium, where this kind of help usually takes months to organise. A simple ritual opens the circle, then we listen and create an openhearted and serene atmosphere that has no taboos. We take a deep dive into the stream of our existence and of it's end. This service is free (gratis) for the families. We guarantee not to let them down. They can call on us whenever they want, and the number of circles we offer are unlimited. (More info on http://re-member-psychischezorg.be)