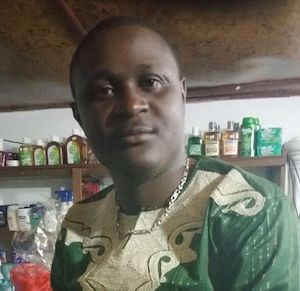 For eight weeks, Dr. Komba Songu-M'briwa worked at the understaffed Hastings Ebola Treatment Centre outside Sierra Leone's capital. When he began feeling sick, he thought it might be exhaustion but on Nov. 26, 2014 he got dreadful news: He’d tested positive for Ebola.

Songu-M'briwa and just two other doctors, along with 77 nurses, worked at the 120-bed treatment centre. It was the "most difficult, most pitiful" work of his life, the 32-year-old said in a telephone interview with Giraffe Heroes Sierra Leone (GH-SL). Even so, he vowed to return to that crucial work if he recovered: "I enjoy the work here and I hope and pray once I'm out of here, I'll take a bit of rest, and I'll come back and fight."

And he did. He was one of the lucky ones who survived the dread disease. Sierra Leone by that point had lost seven doctors to Ebola. The country had only about 135 doctors to begin with, serving 6 million people. Sierra Leone's acute lack of doctors and its crumbling health system are partially a legacy of a decade of civil war.

Health care workers treating Ebola are supposed to spend only about an hour inside a treatment unit because of the dehydration and exhaustion that comes from wearing a sealed protective suit and the focus required to take care of the patients. But there are too many patients to take one-hour shifts at Hastings, Songu-M'briwa said, so he and his colleagues laboured for three or four hours at a time. "We were stretched out--three of us just couldn’t do all the medical work needed," he said.

The staff at the Centre relied on patients to help keep an eye on one another and call for help as needed, Songu-M'briwa said. Ebola is spread through contact with bodily fluids, and often whole families are brought in at the same time. When one's condition worsens, a relative is often the one who sounds the alarm, calling doctors back to the ward to attend to the patient.

Most nights, Songu-M'briwa slept at the facility but he tried to go home to see his wife and two children a couple times a week. When he initially started feeling under the weather, he thought the pace had just gotten to him and he went home to rest. But his symptoms worsened and when he got a fever he was pretty sure it was Ebola. He called his treatment centre to come get him.

Songu-M'briwa was given his own room at Hastings when he contracted the disease, but he otherwise received treatment similar to that of all patients: general antibiotics to keep other diseases at bay, intravenous fluids to replace fluids lost through diarrhoea and vomiting, and good nutrition to keep his strength up. He noted that Hastings didn’t have access to experimental drugs or techniques during the time of the outbreak, but that the basic interventions applied then still helped a lot of people, especially when the infection was caught early, as his was.

Growing up in the Eastern part of the Sierra Leone, Songu-M'briwa was good at maths and physics and he thought he would be an engineer. But his mother wanted him to be a doctor. Many of his former medical school classmates went into private practice in Sierra Leone or left the country, but Songu-M'briwa joined the military where he is a captain. He was working at the 34 Military Hospital in Freetown until he volunteered for duty at Hastings in the wake of the Ebola outbreak. "When Ebola broke out, I felt it was a fight for all of us to try to contain. For me personally, it’s a passion to serve humanity," he said. Before contracting Ebola, he had tried rallying his colleagues at 34 Military Hospital to join him in volunteering for Ebola duty and thought he was succeeding. But his illness "sent shockwaves," making that effort harder, Songu-M'briwa said. "But I told them, 'don't worry,"' he said. "If I became infected and I got through it--we can all get through it. It's not going to stop me. I am not going to relent.”

In recognition of his service during the Ebola outbreak in Sierra Leone, Dr. Komba Songu-M'briwa was given a Gold Medal for his outstanding contributions in the fight against Ebola by His Excellency the President of the Republic of Sierra Leone, Dr.Ernest Bai Koroma.

Today, Dr .Mbriwa had gone back to serve in the 34 Military Hospital in the West end of Freetown.

Asked about the risks he took, he says with an easy laugh, “I have no regrets because I enjoy my job, and I think it's been a blessing to other people."