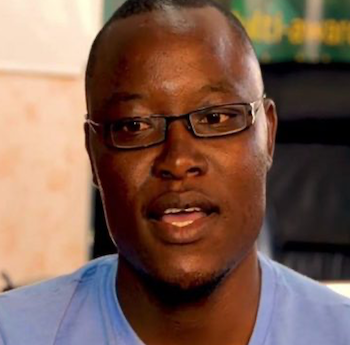 Summary. Elvis Mugari is a human rights activist and founding member of Occupy Africa Unity Square (OAUS) a civic rights organization that champions democracy and good governance in Zimbabwe. He has been arrested, detained and assaulted several times by the brutal Emmerson Mnangagwa regime for leading protests against gross human rights violations in the country but that has not stopped him from continuing his activism fight.

Profile. Elvis Mugari is a human rights activist and founding member of Occupy Africa Unity Square (OAUS) a civic rights organization that champions democracy and good governance in Zimbabwe. Mugari launched OAUS in 2013 along with three others, including human rights activist and Giraffe Hero Itai Dzamara who was abducted by state security agents in 2014 and hasn’t been found or heard of since.

OAUS first actions were against the repressive government of the then strong man, Robert Mugabe. In 2016-17 it formed the “Tajamuka” (We Rebel) pressure group that led a series of protests towards the end of Mugabe regime.

When the 2019 fuel protest broke out, the Zimbabwean authorities targeted Mugari for being one of the organisers leading him to temporarily flee the country to South Africa.

‘I have faced persecution and detention at the hands of two repressive regimes one led by Robert Mugabe and the other by Emmerson Mnangagwa. I do fear for my life at times but I feel it is my duty as a citizen to strive towards the democratization process of my country and will not stop,’ he said.

Mugari also helped establish another pressure group, the Zimbabwe Resistance Movement (ZRM), made up of the youth leaders of 14 political parties and 44 civic society organisations. ZRM’s mandate is to strengthen youth participation in fighting the brutal Mnangagwa government.

‘We realized as youths that we have to converge into one body consisting of political and civic society groups so as to strengthen our struggle against dictatorship and bad governance in the country,” Mugari declares. “As we are approaching the 2023 elections, we need to mobilize thousands of young people to register to vote as well as educating them about the importance of participating in the electoral process.”

ZRM’s demands include that the government halt any evictions of villagers to make way for Chinese mining companies prospecting for minerals in the country. The group also calls on President Mnangagwa to step down.

The situation is dire. Zimbabwe has been plunged into a constitutional crisis that has prompted the arrests and detention of political activists as citizens protest against the high cost of living as well as human rights abuses. President Mnangagwa has been accused of using the military to suppress his opposition, with some protesters getting killed in the process.