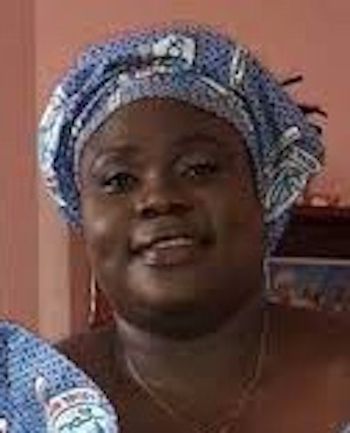 Thumbnail: Fatou Taqi Nee Cole fights for women’s rights in Sierra Leone. Despite intimidation from both the government and individuals, she advocates for female representation in government, for the prevention of gender-based violence, for the abolition of forced early marriages, and for women’s participation and leadership in communities.

Profile: In a country where women are typically not empowered and where challenging their status is often a daunting task, Fatou Taqi Nee Cole continues to change the narrative. One of her goals: to ensure that women are permitted to partake in the decision-making process of Sierra Leone. As recently as 2018, she pushed political party leaders to accept a 30% quota for female representation, but the combination of bureaucracy and intimidation proved too much: another defeat in a battle, but a determined continuation of the war.

For more than two decades, Taqi has dedicated her life to working as a champion for women empowerment in Sierra Leone. She’s currently the Director of Academic & Career Advisory & Counseling Services and the Students Complaints Commission at the University of Sierra Leone; lecturer at the Department of Language Studies & the Institute for Gender Research & Documentation at Fourah Bay College; and President of the 50/50 Group, which strives for gender parity. In addition to her campaign for gaining political representation, she’s involved in a variety of initiatives, including fighting gender-based violence, preventing forced early marriages, and encouraging women to assume leadership roles in communities. Taqi underscores many of these efforts by raising awareness of women’s issues throughout the country and emphasizing the importance of registering to vote.

Taqi has not chosen an easy road. She has been verbally threatened and attacked, her funding has been withheld, and the government has repeatedly denied even her most basic requests. “Our challenges,” she says, “were funding for consistent engagement, lack of political will, attempted intimidation and threats, internal party political dynamics.” Taqi points out that educating women and ameliorating their inhibitions are key to making progress. To this end, she has worked with Legal Aid, Prison Services, and the Sierra Leone Police to coordinate her work. So far, she laments, after “58 years of Sierra Leone’s independence, our leaders have failed us.”

Nonetheless, Taqi persists, and every little step forward makes a difference: “I like to see change being made in the lives of women positively across the country.”

Giraffe Heroes Sierra Leone recognizes Dr. Fatou Taqi for sticking her neck out for the common good and fighting to lighten the loads, strengthen the hearts, and improve the lives of women in Sierra Leone.