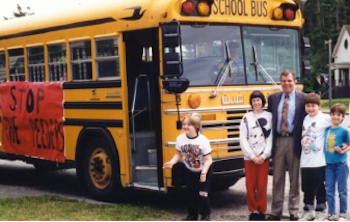 The Discovery School in Coupeville, Washington USA is a public school for kids who've had problems with school work and discipline. When one class at the school took on a service learning program, things really changed. The kids started by asking themselves what issue they cared about. The choice was easy. A student had almost been hit by a car speeding past the school grounds, ignoring the speed limit to get to the nearby ferry landing. The kids knew that this wasn't the only near-miss, and if something wasn't done, somebody was going to get seriously hurt. Making the streets around their school safe was their issue.

The students started off their project by videotaping speeding cars, clocking them, and graphing the results. Then they interviewed workers in the area about near-misses these people had seen. With that data in hand, they got a State trooper to confirm their findings with his radar gun. They got one of the county commissioners to visit their school, to see the problem for himself, then made a formal presentation to all the commissioners. The result was a $12,000 traffic light, a crosswalk and the admiration of everyone who witnessed what they'd accomplished. The students themselves experienced the satisfaction of service, the power of teamwork—and their own value as people who could get an important job done.