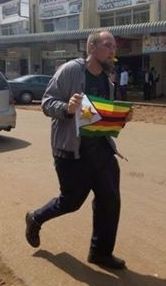 When Zimbabwe attained Independence in 1980 after 90 years of British colonial rule, a majority of white nationals took the backseat in participating towards participating in active politics or civic activism.

They were further alienated by the 2000 land reform which witnessed a greater majority of the population loosing farms and other properties. Ever since they have been playing a “Wait and see game” and it has become so “unusual” to hear of “white activism” in the country.

But that stereotype seems to have been broken by one youthful young man, Dick Frey, a Zimbabwean born white man who has refused to stay aloof as the economy crumbles.

Dick has been instrumental in taking part in the “Occupy Africa Unity Square” campaign and he has risked beatings in the end.

Recently he was seized in the Central Business District (CBD) whilst leading a peaceful march. The police threw him into their van where he was thoroughly beaten up and later dropped off the outskirts of town.

He had to seek medical attention but still remains committed in fighting for democracy in the country.

“They quickly grabbed me by the belt, handcuffed me, and loaded me into their truck. One officer yelled at me to sit down. Then lie down on my stomach. I assume that they didn't want me to see where we were going, and didn't want people to see me in the truck. All the time we drove, they yelled abuse and beat me. I won't lie; it hurt.

One of them especially was fond of punctuating each hit of his baton with racist remarks. When they were done with me, they dumped me at the edge of town. Some kind people there gave me some water to drink and allowed me to stand in their shop for a moment while I got my belongings,” said Frey.

When asked whether he will quit the campaign, Dick said "No" in no uncertain terms. “I grew up here. I know no other home. I love Zimbabwe, and she owns the chief part of my soul. Every time I leave the country, I leave my soul behind. So I don't care if they beat me again. I'm not doing this for myself. I do this for this country I love. I do this for the young man, exiled to feed his family. I do this for the children living on the streets when they should be in school. I do this so as not to let down my comrades. Because I have a duty. I owe it to the people looking to us and hoping that dawn will break, praying that this our country finally sees the peace, the justice and prosperity she deserves. An end to the suffering, the poverty and the indignity we have endured for too long,” he concluded.