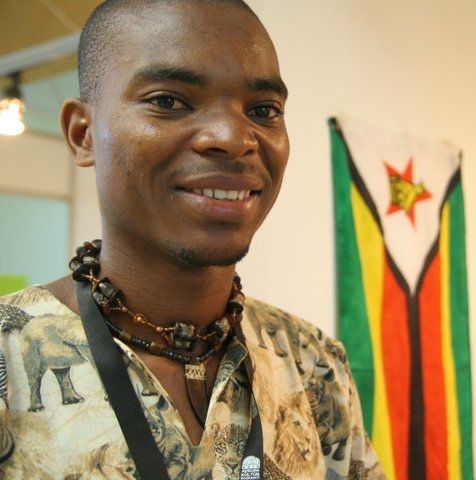 31 year old James Bayanai has set himself on a track to make his contribution to change the world through spearheading projects to promote literacy in rural Zimbabwean communities.

Since 2010 James has been involved in International Youth Advocacy and plenty humanitarian initiatives.

In May of 2010 while working in Cape Town SA for an Internet Service Provider, James Bayanai received a challenge of his life after reading in the Cape ARGUS ( a local Capetown paper) about young South Africans who were making a difference in upholding the lives of less privileged in their communities. James decided to be part of the young global change makers.

He came back home and initiated a project to promote literacy in Zimbabwean rural communities through provision of basic educational materials and establishment of community libraries in communities where the student book ratio was 1 book per 36 students and most of the schools do not have computers,. He named the Project Zuva Rabuda/Sunrise and he founded an organization: Zimbabwe Youth Development Foundation Trust ZYDFT.

James has met a lot of challenges in the process. This is just a dream that he started with absolutely no financial support from anyone. He struggled to find local partners to support his outreach programs financially. It’s quite unfortunate that despite repeated efforts to approach the relevant government ministries in Zimbabwe (Education and Youth) no Ministry has ever offered James the financial assistance needed in his initiatives. At some point a Container of 60 000 children’s books was almost confiscated at Nyamapanda Boarder Post because there was duty to be paid and James could not raise the amount. Having approached relevant Ministries months before the arrival of the consignment, it only took the good heart of an individual in the United States to save the consignment.

James started his initiative as someone unknown in the public domain, it was difficult for him to get recognition from various stakeholders whom he needed for his project to kick off. Some would deem his social initiatives as political and this presented a different set of challenges. It is difficult to undertake a program such as this one which brings people together without raising eyebrows in the political arena. It was rough path trying to get the support and trust of traditional leaders and politicians in the community.

James has fought relentlessly to secure educational resources for thousands of rural students throughout Zimbabwe. To date, he has received educational materials from as far as USA, UK and Austria and has successfully secured and distributed over 100,000 books to rural schools in Zimbabwe. With the assistance of Bisila Bokoko African Literacy Project, he raised a scholarship fund for 25 rural children at Maware Primary School. James has also established a community library in the Chirumanzu rural community in the Midlands Province in Zimbabwe where he hails from.