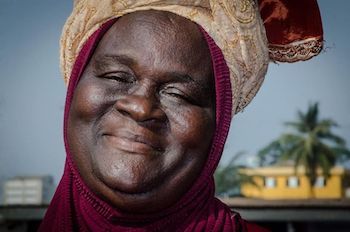 Summary: Haja Marie Bob Kandeh promotes women’s empowerment, independence, and civil rights throughout Sierra Leone. Starting out as a vendor at a Freetown street market, she soon became Secretary of the Market Committee, helping women negotiate both business and family issues. She co-founded the Sierra Leone Market Women Association and since then has become a champion for women’s rights, most recently visiting communities around the country to educate people on staying safe from COVID-19. Because of her activism against forced marriages and domestic violence, Kandeh continually risks being attacked by men who oppose such views.

Profile: From early on in her life, Haja Marie Bob Kandeh experienced obstacles, pain, and sadness, often the result of being a female in a male-dominated society. She turned all this into a crusade to help other women.

Kandeh was the only child in her Sierra Leone family to attend school, even though she had to leave when her mother fell ill. She returned, studied to be a clerk, and finally began to sell goods at the Garrison Street Market in Freetown. Kandeh remembers: “Though I didn’t know it at the time, this was the start of my life as a woman’s rights activist. I began noticing the challenges many of my women customers face.”

Kandeh started advocating for her fellow market women, and in 1994 was elected as Secretary of the Market Committee organized by the Freetown City Council. In that capacity, Kandeh served as a mediator in not only business disputes but also family disputes. Two years later, she co-founded the Sierra Leone Market Women Association, dedicated to educating market women as to their rights and responsibilities as citizens. Since then, Kandeh has become a standard bearer for women’s rights, serving on the Women’s Commission, Association for Rural Development, Civil Defense Unit, Anti-Corruption Commission, and Constitutional Review Committee.

Being a woman in such a role comes with risks; such activists are often threatened and attacked by men who feel that women shouldn’t have any roles beyond obeying them. This applies particularly to Kandeh, since she has educated people and encouraged them to speak out on such issues as forced marriage (she entered into a marriage when still a teenager) and domestic abuse. She does this quite frequently at the market, on radio programs, and during visits to communities throughout the country.

Lately, the COVID-19 pandemic has exacerbated the already commonplace acts of violence against women and girls: “We heard stories of girls being forced into marriages with older men; young women pressured into marriage for their own survival; teen pregnancy rates going up; women coping with physical and emotional abuse by partners; and families under economic stress due to business opportunities drying up as the borders closed.” So Kandeh met the challenge head-on, meeting and giving important information to women in rural districts such as Kambia, Port Loko, and Tonkolili: “We taught them COVID-19 prevention measures and held meetings on the more complex issues, including sexual- and gender-based violence.” She also helped to distribute over 1,000 cloth masks to vulnerable market women and encouraged them to practice physical distancing.

Kandeh continues her work with humility: “I am not an educated person. I had to leave school early to work to put food on the table. But that didn’t stop me from doing good to my fellow community members.”

And her plans? “I hope to use my voice to inspire and impact the next generation of young women and girls to embark on activism, because the fight is for the health of not only ourselves, but country.”