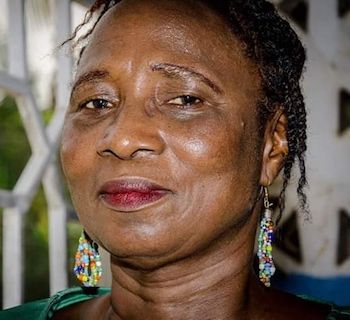 Summary: Hannah Yambasu has helped thousands of Sierra Leonean women in need—women who are victims of violence and other forms of abuse, women who are underprivileged, and women who need counseling, education, access to the courts, or escape from childhood marriages. Through her organization, Women Against Violence and Exploitation Society (WAVES), Yambasu is there for them.

Profile: Hannah Yambasu helps women in Sierra Leone who desperately need help. Her organization, Women Against Violence and Exploitation Society—WAVES—is a haven for underprivileged women and a champion of their rights. It “seeks to promote the rights and empowerment of women” and constantly calls on the government to make laws addressing gender-based violence and children’s rights. WAVES calls for the liberation of women from all forms of abuse that hinder their development.

In 2002, at the end of the civil unrest in Sierra Leone, no existing structures addressed violence against thousands of women and girls; much of that violence was considered a “family affair. More than 50,000 women and girls were at the mercy of “jungle justice”. WAVES and other organizations came together to change that attitude and to offer programs promoting career guidance, confidence building, leadership skills, and advocacy.

Hannah believes that ‘too much dependency is evil,’ which is why one of the first activities she undertook with WAVES involved property rights for women, and a major aspect of that work was making leaders understand that women and men have equal rights to justice. Since then, the right to property has helped many widows regain their dignity and respect. Along these lines, some WAVES programs offer assistance to victims of land grabbing and abuse; this assistance includes psychological support, legal access, referrals for redress, and transportation to police stations, courts, and hospitals.

An example of WAVES’ successful advocacy: In May 2019, WAVES lodged a Public Interest Litigation in the Community Court of Justice of the Economic Community of West African States (ECOWAS) in Abuja, Nigeria, against the Government of Sierra Leone on behalf of pregnant adolescent schoolgirls. The action followed a 2015 ban by Sierra Leone on pregnant girls’ attending mainstream schools and sitting exams. Yambasu maintained that the ban violated the rights of girls to education as well as nondiscrimination and equality under the African Charter on Human and Peoples’ Rights, African Charter on the Rights and Welfare of the Child, and Protocol to the African Charter on Human and Peoples’ Rights on the Rights of Women in Africa. In December of that year, the ECOWAS court ordered Sierra Leone to revoke the policy banning pregnant girls from accessing mainstream schools.

Yambasu continuously works with communities and organizations—for example, Defense for Children International Sierra Leone and Child Welfare Society-Sierra Leone—to lobby for the eradication of practices that hinder women’s and girls’ full physical, emotional, and spiritual development, such as sex trafficking in particular and sexual violence in general.

Yambasu’s childhood was not easy; she and her mother hated each other. That forged her later development, for both good and ill: “As I grew up, I realized I needed to change the whole narrative. I can’t go on hating anybody.” It took love from other women to remind her that not all women hated children. This love would become the foundation of her fight on behalf of women and girls. As an adult, Yambasu’s most dramatic challenge was the death of her adult son. She regained her strength only by focusing on her service to humanity, especially making the world a better place for her remaining children and grandchildren. She believes her strength is the women and girls she serves.

Not everyone in Sierra Leone is happy with Yambasu’s work. She faces constant resentment from traditionalists and others. Nevertheless, over the past decades, Yambasu has learned that fear is the biggest drawback facing women, and she counsels both them and herself to stay committed to their goal of helping each other. Women, she maintains, should share their experiences to help build self-esteem in other womenand help change narratives for women and girls.

She visualizes a nation “where women and girls are free from violence, are capacitated to stand up for their rights, have unhindered access to education, with full support from their community and policies.”

Thanks to Yambasu’s efforts, that dream is gradually but assuredly turning into a reality in Sierra Leone.