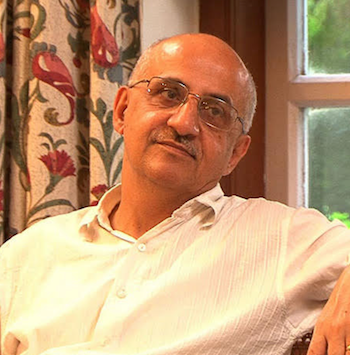 Harsh Mander may have gotten an early lesson in living a life of service. When his father was in the Indian diplomatic corps, he helped the Dalai Lama escape from Tibet to India, where the renowned refugee stayed in the Mander house.

Young Harsh grew up to be the founder of: the National Campaign for the People’s Right to Information; Aman Biradari, a group that promotes secularism, peace, and justice; Nyayagrah, which promotes legal justice and reconciliation for the survivors of violence; Dil Se, which advocates for street children; and Hausla, which advocates for the urban homeless.

He's now the director of the Centre for Equity Studies, which advocates for social and economic justice. He teaches courses on poverty and governance at the Indian Institute of Management.

Phew. None of this has been easy. The people for whom Mander typically works are not powerful or influential, and in order to be effective, Mander has challenged many institutions, including the government of his nation. He's been threatened more than once with death, arrested for supporting student protests, and slandered by the current president of India.

In the early 2000’s, Mander worked for the Indian government while the country was in an upheaval: Religious minorities—Muslims, predominantly—were slaughtered; women and children were targeted for violent abuse; and the government established camps for the displaced, where they were severely mistreated.

As Mander noted: “A common living space for both men and women in the relief camps, some places having just two bathrooms without roofs for 5,000 people and no toilets facilities as well, meant a total lack of privacy for women, insufficient or no place to sleep . . . and also no privacy for women.”

Mander’s public observations caused a stir and gradually he had an effect, though he resigned from his office to protest the government’s reluctance to act.

When Mander published a research paper detailing the survival strategies of the homeless, he was invited by Giraffe Hero Jim Withers to attend an International Street Medicine Symposium and became immersed in the issue. He's now created street medicine programs in four Indian cities.

As of 2020, the environment in much of India is not friendly to Muslims and lower caste Hindus. In response, Mander created a “caravan of love” in which activists, journalists, and others travel across the country to visit the homes of victims’ families, apologizing for their mistreatment and offering support.

All these efforts have come at a cost. The Indian government has at times been controlled by various right-wing parties that, for example, blocked Mander’s efforts to reorganize the health system.

No matter how much opposition he faces, Mander continues his crusade against religious bigotry and social injustice. What he said in 2016 still holds true: “This tragic blood-letting in the name of religion will end only when the law holds governments accountable to perform their highest duty mandated by the Constitution: to secure equal protection and justice to all, regardless of which god they worship.”