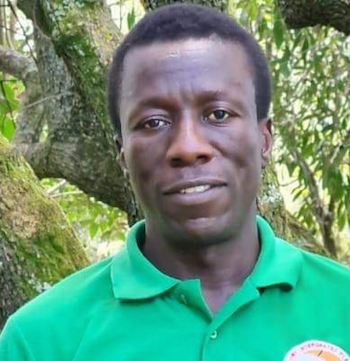 Summary: Zimbabwean native Ishmael Kauzani has been subjected to violence and harassment many times, merely for his efforts to promote human rights. After he and his family were attacked, he fled Zimbabwe for South Africa. In 2019, Kauzani formed the Zimbabwe Integrated Platform, a nonprofit organisation that seeks to achieve social cohesion through alleviating poverty. Located in Diepsloot, the organization manages nutrition gardens, environmental campaigns, reproductive health education, support for girls and young women, social support, and educational initiatives. Despite all his achievements, Kauzani is often told to go back to Zimbabwe; nonetheless, he uses what little income he has to continue his humanitarian work.

Profile: In January 2019, Ishmael Kauzani and his family fled Zimbabwe and entered South Africa. He did this because he was continually persecuted by Zimbabwe’s authorities, and that happened because Kauzani tirelessly campaigned for democratic change.

The persecution wasn’t minimal, either. As Kauzani testifies:

“ . . . I suffered a lot of torture in the hands of Zimbabwean government, and I was arrested more than 80 times on fictitious charges due to my political activism. I left Zimbabwe in January 27, 2019, after an attempt on my life by CIOs (Central Intelligence Organisation) and the military. They attacked me at my house by firing some shots on me, and I managed to escape to South Africa. They beat my wife and my neighbours . . ..”

Two years earlier, Kauzani was abducted by suspected Zimbabwean state security agents, assaulted, and left for dead: “They bundled me into their truck and started beating me with logs as they drove to a forest, where they further severely assaulted me and left me there. They came back some moments later and found me still there, as I could hardly stand. They ran their car over my legs and took away all my clothes, leaving me naked.”

Three years before that he was accused of petrol-bombing offices and stores in a shopping centre. He was detained for five months, after which the charges were dropped.

The attack on his family, however, was the breaking point. Kauzani fled to Diepsloot, where a year later he was struck by the deep realities of poverty among both locals and non-locals. In September 2019, he formed the Zimbabwe Integrated Platform in order to promote environmental sustainability and humanitarian support for communities living in abject poverty. He and the organization have done much to achieve those goals. They picked up rubbish and plastic from the Juksikei river. They partnered with Live Life Always and Fourways Lions Club. They provided social support to the residents of Diepsloot. And:

“We have been feeding 200 families by giving them feed hampers for the past eight months. We distributed 10,000 sanitary towels to schools in Diepsloot and to the need around the community. We give about 222 pairs of shoes and uniforms to school children around Diepsloot.”

Lack of basic needs, including menstrual care, has been highlighted as a cause for underperformance and high dropout rate in most schools in South Africa.

In its Millennium Development Goal 1, the United Nations commits to the eradication of poverty and prevention of hunger. On realising the negative impact of malnutrition to children’s growth and the general health of the community, Kauzani began to grow gardens in Diepsloot.

“ . . . We grow cabbages, carrots, onions, and spinach—not only as a skill development initiative but also with the aim of providing fresh vegetables to 100 disadvantaged families despite the challenges of inconsistent water supply. We are also teaching and encouraging communities to start doing backyard gardening by utilising the small space. We encourage use of empty sacks, used tires, pipes, and tins to grow different types of vegetables in their backyards.”

Though the beneficiaries of Kauzani's initiatives appreciate his work, some locals believe he is “stealing” their resources and want him to return to Zimbabwe. “These comments,” says Kauzani, “always pull us down, but because we do what we do out of passion, we quickly ignore all the negative comments.”

Doing good is not always easy, however. Kauzani has very little income, and he uses what he does have to support his efforts:

“I survive with an income-generating project of raising broilers. In most cases, whenever I get some donations of food, I always use money from my pocket to go and pick up the food. And when delivering the food to the community, I will have to use my own money. I believe in Ubuntu, and Ubuntu is sharing, caring, and teaching.”

Despite all the continued attacks, Kauzani is determined to weather the risks and continue his work: “Doing what I am doing is a calling and I am doing this out of passion . . . I will continue working with the need in my community no matter what.”