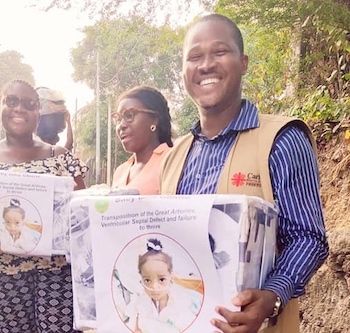 Since 2018, Giraffe Hero Ishmeal Charles has founded and leads the ‘Sick Pikin Project’ to raise funds to help children with critical medical conditions. To date, Charles has helped over twenty 20 children with help coming for another 16. On December 23, 2019 two out of those 16, with support from the Ministry of Health and Sanitation and a few individuals donors, traveled to India for medical treatment. Charles continues to stick his neck out to seek funding for helpless, sick and impoverished children and babies.

‘It's another day and we are still in the fight to make the difference”, Charles said on his Facebook page in January, 2020. “These babies needs us. We are not gonna let them down by God's grace. Love will continue to be the ONLY reason why we will do this again and again. Thank you to our tireless volunteers and our kind and friendly donors.” 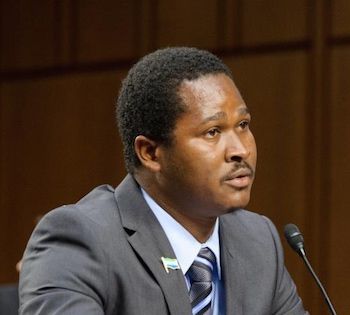 Original story: A survivor of the brutal life of a child soldier, 31-year-old Ishmeal Charles is now advocating for other survivors of that horror. He also continues to lead an 11-member Ebola-awareness team--high-risk work that helps save the lives of others throughout Sierra Leone.

His road to this healing work has been a harsh one.

In 1997, when he was 10 years old, his mother sent him to Kono District, in eastern Sierra Leone, to live with his father because Kono was considered the safest place to be in Sierra Leone. The relative security was short-lived; the rebels retreated from Freetown and into Kono, killing and mutilating indiscriminately.

Gunmen raided his village and conscripted him into the Revolutionary United Front--the Sierra Leonean rebel group notorious for using children as soldiers and labourers, and for using machetes to chop off the hands and limbs of captured government soldiers and of civilians.

Charles describes being saved by miracles. The first came when a government jet fighter strafed an RUF encampment, and he escaped into the jungle during the chaos. The second came when Charles, recaptured by an RUF team, was slated for amputation as a punishment for running away. Charles had been asked if he wanted “short” or “long sleeve” amputation, i.e. at the wrist or below when another jet attacked the camp and he was able to escape again.

The third miracle came after he had been captured by a pro-government militia and caged with several other rebel captives. If no one would vouch for him, Charles would be taken to the river, shot, and tossed into the current.

“A woman came out of nowhere and said she knew me,” Charles recalls. ”I had never seen her before, and I never saw her again.”

Released by the militia, but with nowhere to go, Charles was re-captured by the rebels, taught to use a gun, and forced to become a child soldier. He also served as a labourer, carrying loads of stolen supplies on his head whenever the rebels would go looting. Charles fled once more, making it to the Guinea border, where he spent almost five months living without shelter in the bush.

When peace was restored, he returned to Freetown, made up the schooling he had missed, graduating from high school, then earning a Diploma in Peace and Conflict Studies from the University of Sierra Leone. He has now earned a certificate in International Humanitarian Affairs from Fordham University in New York.

Ishmeal Charles has used his education to become a strong advocate for post-conflict youths. Currently he is Healey International Relief Foundation Program Manager in Sierra Leone, working with Caritas-Freetown, managing all their projects in Sierra Leone. He currently leads 10 volunteers and 5 staff members working on an Ebola Awareness and Prevention Project in 11 communities in the rural Western District of Sierra Leone.

His passion for his job is driven by his past. Charles credits his personal determination and support to his mother who enabled him to overcome the many obstacles he has faced.