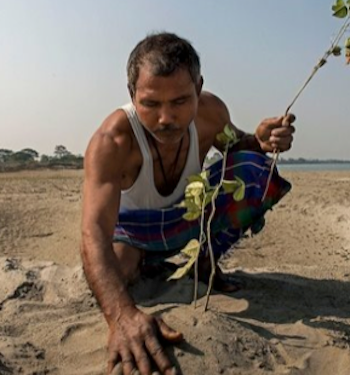 It started with dead snakes. Jadav “Molai” Payeng was 16 years old when he noticed them on a sandbar close to his home in Assam, India.

“The snakes died in the heat, without any tree cover. I sat down and wept over their lifeless forms. It was carnage. I alerted the forest department and asked them if they could grow trees there. They said nothing would grow there. Instead, they asked me to try growing bamboo. It was painful, but I did it. There was nobody to help me. Nobody was interested.”

Payeng started with 20 bamboo seedlings on an island in the River Brahmaputra, watering them dutifully. Then he began planting trees, living alone, scraping by on what he could grow and find, planting more trees every single day.

Decades later, he’s still there, and so are the trees. They now comprise the 1,360-acre Molai forest, almost twice as big as New York City’s Central Park, and probably the world’s biggest forest in the middle of a river. A herd of about 100 elephants spends half the year there, every year. It's also home to apes, tigers, rhinos, deer, rabbits, birds, and a lot of snakes.

Payeng now lives with a wife and three children in a hut near the forest. His only source of income is the milk he sells from the livestock on his little farm. Every day he rides his bicycle about 10 miles and rows a boat to get to the island in order to continue his planting.

An official of a local environmental organization has said, “With sheer hard work and perseverance, Jadav has shown the world the power of will of a single human being.”

Despite the praise, Payeng remains humble, focusing only on his life’s work. “Humans are said to be the smartest of all life forms on earth,” he says, “but it’s the humans who are responsible for the degradation of the environment.”

He’s now planting trees in other spots throughout Assam.