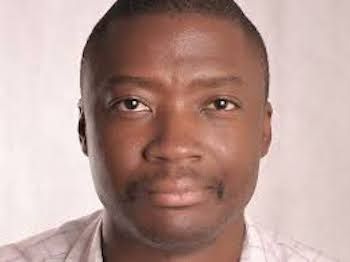 Summary. Joe Hindoveh Pemagbi has been a fighter for social justice since 2001. As Sierra Leone Country Officer for the Open Society Initiative for West Africa (OSIWA) he’s courageously taken up public interest campaigns, insisting on access to information, justice, and respect for human rights. These rights are enshrined in Sierra Leone’s 1991 Constitution, but demanding that they are upheld is not something that many corrupt leaders appreciate.

Profile. Amid threats to his life stemming from a rebel incursion, Joe Pemagbi left college in 1994 and fled to neighboring Guinea; he returned to Sierra Leone in 1998, where he embarked on a crusade to restore human rights, democracy, and good governance to his home country.

“The idea is to track the whole decentralization and devolution process as provided for inthe 2004 Local Government Act,” explainedPemagbi.Onestrong effort was a filingin a foreign court against the government of Sierra Leone for an alleged mismanagement of Ebola Funds following the outbreak of Ebola in May 2014, which left thousands of people dead.Why a foreign court? Pemagbi explains that using a local court would have been“counter-productive due to the overbearing influence of the executive over the judiciary.”The case is ongoing.

Pemagbi is a constant advocate for the voiceless, engaginggovernment agencies, ministries,and departments on issues that are of interest to the civil societyand non-governmental organization (NGO) community in Sierra Leoneand the people they serve.Between 2016 and 2019, for example, Pemagbi,through OSIWA,haschallenged the Government’s NGO registration and renewal policies as being too arbitrary and cumbersome, thus stiflingdonor funds coming to help the poor.Worse, Pemagbi charges that, with a repressive government in office, the process can be used to suffocate the operations of NGOs.

In 2019, Pemagbi began investigatingthe government’sPolitical Parties Registration (PPRC) legislation, pushing fora more robust instrument to help monitor the activities ofpolitical partiesso as to better document anyhuman rights violations before, during, and after elections. He’s also inspectingthe work of the Access to Information Commission to ensure that citizens actually do have access to information, whichcan not only inform their decision-making process but alsoempower them to hold their government to account. In addition, Pemagbi’s office monitors the Mines and Mineral regime of Sierra Leoneto guarantee the equitable distribution of natural resources.

Pemagbi has indeed brought about changes. Through his effortswith OSIWA, hehas been instrumental in creatingthe Legal Aid Board of Sierra Leone, the Public Elections Act of 2011, and the Right to Access Information Law of 2013.

Pemagbi’s crusades are not without risk. “There are challenges in doing our work,” acknowledges Pemagbi. “Because we support both government and non-governmental organizations, state and non-state actors, some people want to see us provide resources for everything. And due to the winner-takes-all approach of Sierra Leone’s political system, people query the work we do at OSIWA.” Permagbi has been attacked in the media for his work on accountability, human rights, democracy,and good governance.He’s been accused of supporting civil society organizations against the government, when in fact he was just working with local institutions to demand respect for the country’s laws

Joe Pemagbihas the passion to improve life for his fellow citizens. He constantly works fora peaceful, just, and prosperous country:one that respects and promotes human rights, and one that upholdsaccountability and transparency.