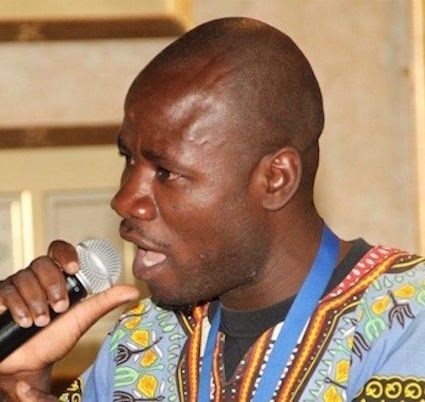 Summary: Mbizvo Chirasha is a poet, and much of his poetry illustrates how the Zimbabwe government is oppressing its people. Chirasha has been arrested several times, but he remains an activist that continues to challenge the Mugabe regime. He has founded an organization to help girls, and he has fostered other poets by teaching young people how to further humanitarian efforts with their writing.

Profile: Don’t ever let anyone tell you that poetry has no power. If it didn’t, then Mbizvo Chirasha would not have been arrested as many times as he has.

Mbizvo Chirasha writes poems that illustrate the human rights abuses inflicted upon the people of Zimbabwe by the government of President Robert Mugabe. And that government is not a fan of such poems.

Nonetheless, Chirasha uses his talents to make his fellow citizens aware of the wrongs heaped upon them by the government. He has also founded Girl Child Voices, a nonprofit organization that identifies and seeks to help marginalized girls. The organization conducts awareness campaigns against sexual abuse, encourages girls to stay in school, and generates and distributes educational resources.

He has also gathered young people around him to teach them how to write their own poetry. That is of the utmost significance to Chirasha. “We want to see artists engaging more with the national question,” he says, referring to the ongoing disputes between the Zimbabwe government and its people. “With their art work, artists can play a major role in diffusing tension that is currently being experienced in Zimbabwe. We want artists to be transmitters of peace who, in their collective effort, can help spearhead an effective peace campaign.”

Chirasha’s poetry, his activism, and his speeches rankle the government, which has become increasingly autocratic and harsh against its critics. But Chirasha is resolute: “I have been detained by the police after staging critical shows that highlight human rights abuses in Zimbabwe, but that will not deter me from carrying on with my work as a poet. As long as society is not free, I will not be silenced.

“I will continue to be a leading voice of the voiceless and oppressed.”