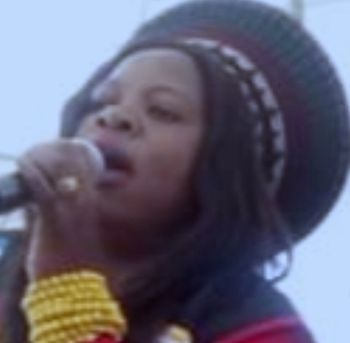 Summary: Melita Ngcobo fights against local South African governments that are essentially destroying poor neighborhoods in what is called “reblocking.” In some cases, already poor people, without notice, see their homes—often shacks—demolished and are forced to live in thoroughly unsafe areas. Ngcobo has protested these actions as part of the community group she leads—Abahlali. For her efforts, she has been attacked, wounded, and jailed, and other members of the group have been subjected to even more lethal attacks.

Profile: Melita Ngcobo stands up against the government, against the police, and against prevailing systems to protect her neighbors from being kicked out of their homes and subjected to even more poverty than they’d been experiencing. And it all started with “reblocking”.

“Reblocking” is a process of reconfiguring the current layout of an informal settlement and reorganizing it in a way that optimally uses space. In the first case that attracted Ngcobo’s attention, in 2018, the South African neighborhood of Vusimuzi was scheduled for reblocking. Vusimuzi is a poor area with 35,000 people and 8,500 shacks. The problem wasn’t necessarily the reblocking; the problem was that no one in the neighborhood was consulted about how the reblocking would be done, and, as Ngcobo said, “They could demolish some houses, leaving people suffering.”

Ngcobo and her colleagues wanted residents to be involved from the planning up to the implementation of the process: “There was no consultation at all before this disastrous development was started. We do not know how much budget was allocated and for what.” So Ngcobo and others from the community group she leads, Abahlali, sought an interdiction against the demolitions, and the court agreed. Ngcobo also successfully advocated for community members to be involved in the planning for reblocking.

At first it all went well. “At one time,” says Ngcobo, “we talked to the Department of Housing, and they gave us a chance to show them what we really wanted. In the eSitineni section, where the Department allowed us to design the reblocking, it was done the way we wanted and it was beautiful. Even people who were not from Abahlali were happy with our reblocking. People from the other sections in Vusimuzi saw the reblocking and said this is perfect. This is what they wanted. We did not remove everybody like the City’s model did, and our lot sizes were bigger than those designed by of the Department.”

But things didn’t go as well the next year when Ngcobo’s group was shut out of the process and sought to stop demolitions near the city of Ekhurleni. This time, local officials assaulted Ngcobo and others from Abahlali and then arrested her. She was bruised all over her body, sent to the hospital, and confined to jail for four days.

Ngcobo related what happened: “There is risk involved in this work. The councilor in my community mobilized people to attack me for exposing corruption and opposing his anti-people policy. I suffered serious bruises on my legs and my face. Because of my activism, I was arrested and falsely accused. It’s easy for people to kill you for this cause.’’ She added, “Our members have been beaten, subjected to illegal arrest, tortured, driven from their homes, and murdered.”

And the cause to which Ngcobo refers is dire for many people. Abahlali put out a description: “The belongings of people, including furniture, clothes, and food, have been thrown away. Some people’s homes have been fully or partly demolished. Some have been forced onto river banks, where it is not safe. Some have been forced to rebuild over old pit toilets, and some people are sick. People’s self-built toilets and other infrastructure have been destroyed.”

Ngcobo and her fellow community workers from Abahlali continue to protest, despite the threats; they feel they have no choice. They represent people who have little to no power to make positive changes in their lives.

As to the overall situation, she says, “Our movement will continue to insist that we all have the right to join any political organisation of our choice, that we all have the right to oppose the actions and policies of the ruling party, and that it is the systems of capitalism and racism that have impoverished us that are the problem in our society, and not the people who have been impoverished.”

And on the local, more personal level: “It is our duty to fight for the rights and dignity of our people. I feel happy to see people putting on happy faces when their properties are not destroyed and shacks not demolished.”