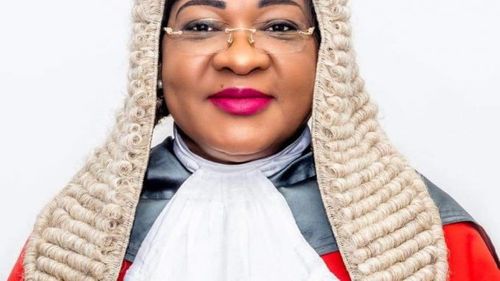 Summary: Justice Miatta Maria Samba is a judge of the Court of Appeal in Sierra Leone. She is a strong crusader for human rights and gender equality, and an equally strong crusader against corruption. Because of her efforts, Samba has faced many threats, but has never allowed any extraneous factors to influence her judgment. In 2020, she was nominated by Sierra Leone to be a judge on the International Criminal Court (ICC) for 2021-2030.

Profile: For over 15 years, Sierra Leone Justice of the Court of Appeal Miatta Maria Samba has been a fighter for gender equality and human rights as well as an anti-corruption champion. Prior to her appointment to the Court of Appeal, Samba served as a judge of the High Court of Sierra Leone from 2015-2019. And before that, she served on the sub-committee of the Sierra Leone Law Reform Commission, which focused on reforming gender law to help female victims of gender violence achieve justice. She has been lecturing on Criminal Law at the Fourah Bay College-University of Sierra Leone—where she attained an LLB degree—since 2003. Justice Miatta Maria Samba also holds LLM degrees from the Centre for Human Rights, University of Pretoria in South Africa, and the Centre for Petroleum Law and Policy, University of Dundee in Scotland.

Samba’s feelings about gender rights stem from her childhood: “My early understanding of human rights, as it was conveyed to me by my mother, was that it was God’s gift to us as human beings and nobody had the power to take it away from us. Of particular significance to me are our right to education, our right to work, and our right to own property. . . . I witnessed my mother struggle to assert these rights. My father, despite the privilege of being so highly educated, was of the view that the traditional role of women and of a wife was to take care of the family within the confines of the home. With a firm belief in human rights and strong academic knowledge on the subject matter, I chose a career which focused on the protection and promotion of human rights.”

Samba is committed to bringing human rights violators to face justice. In 2006, she joined the International Criminal Court (ICC) as a field Operations Officer for the Office of the Prosecutor; she was assigned to the Uganda Field Office. She travelled extensively, putting her life at risk in Sierra Leone and Uganda in an effort to protect and promote the rights of witnesses and survivors who were participating in an accountability process: “I place great importance on the psychological and physical welfare of survivors as witnesses in the criminal justice processes, and I wanted to work in a position which gave me a role in ensuring that survivors and witnesses of international crimes would be able to meaningfully and safely participate in trials.”

Samba has also participated as a member of Legal Access through Women Yearning for Equal Rights and Social Justice (LAWYERS), the leading gender advocacy organization in Sierra Leone.

Because of her efforts, Samba has faced many threats. While serving as Senior Prosecutor for the Anti-Corruption Commission in Sierra Leone, she prosecuted people with political connections, including the mayor of Freetown and executive directors of government agencies. Although she was harassed, she remained steadfast in her evaluation of the merits of the cases and on the evidence presented; she did not allow any extraneous factors to influence her judgment.

Serving as a female Justice in a patriarchal society like Sierra Leone comes with many challenges. “I do my best,” says Samba, “discharging my responsibilities without fear or favor and without any kind of bias. Values I place on integrity, fidelity to the law, and my Constitution; impartiality and fairness have been my constant companions daily. Once I was appointed as a Judge, I had to re-arrange my social network and interactions and ensure that my private life would never be a spectacle that may affect perceptions of my independence or fairness. Having to extricate myself from social activities was a challenge. Balancing one’s private and professional life in this way can offend friends and relatives, but I was fortunate to have been met with understanding and good will all around.”