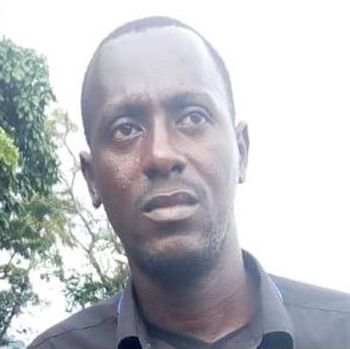 Summary: Mohamed Kamara, a citizen activist, continually fights for the rights of people in Sierra Leone, even though his efforts have made him many enemies. He has publicly charged government officials of corruption and called on Sierra Leone’s present government to institute policies that would eliminate it. Kamara campaigns vigorously against alcoholism and drug abuse, particularly as they impact young people. For his efforts, he has been criticized and even imprisoned.

Profile: Mohamed Kamara, a citizen activist, continually fights for the rights of people in Sierra Leone. As the founder and Executive Director of Youth Empowerment and Development-Sierra Leone (YEDA-SL) Kamara calls corruption, “the worst disease in the world”.

He knows what he is talking about; he’s been fighting corruption and promoting health and safety for many years, often having to overcome barriers that would intimidate others.

Mohamed Kamar believes that government officials who have access to state funds shouldn’t abuse their position by recklessly spending those resources. So, he continues to monitor corruption-prone sectors within government with a view to raising the red flag when found wanting. “We have an Anti-Corruption Law and that has been amended in 2019,” he points out, “yet a high number of corruption cases keep coming up.”

His efforts have sometimes brought seriously negative consequences: Once, for example, when he traveled to Kono in Eastern Sierra Leone to unearth a corruption matter involving senior government officials, he was arrested and thrown into Kono’s Central Prison for close to a week. The charges against him were later nullified by the courts.

Kamara’s response? “Challenges like this get me going, and I will not quit.”

Kamara has worked closely with the Sierra Leone government when necessary.

Back in 2013, he signed a Memorandum of Understanding with Sierra Leone’s Anti-Corruption Commission (ACC) as a way to express his organization’s loyalty to Sierra Leone and to show his resolve to use all paths to fight corruption. The partnership enhanced the organizations’ power as a whistle blower and partner in championing campaigns against state graft. Still, Kamara has been criticized by other activists for such alignments but he defends them. “With the test of time, he says, “YEDA- SL believes that we have exposed more corruption (this way) and we will continue to engage in a robust advocacy.”

Another primary focus of Kamara’s work is to empower youth to be socioeconomically stable; free of drugs and violence; and, particularly in the case of women, able to maintain their rights.

Kamara campaigns vigorously against alcoholism and drug abuse, particularly as they impact young people. As part of that effort, Kamara helped guide a Campaign against Drug Abuse and Alcoholism, engaging the media, government authorities, local police officials, and community leaders to not only prevent young people from using drugs but also to keep them from turning to crime.

Another campaign focused on better health care and particularly on issues relating to reproductive health and gender-based violence. In June, 2021, during the pandemic, Kamara travelled to Karene District in Northern Sierra Leone to monitor and report on health service delivery, especially with patients who find it difficult to access treatment.

And as far as threats and intimidation: “Activism is my passion, and I won’t be intimidated. As long as we are living in a corrupt and unjust society, I won’t be silenced.”