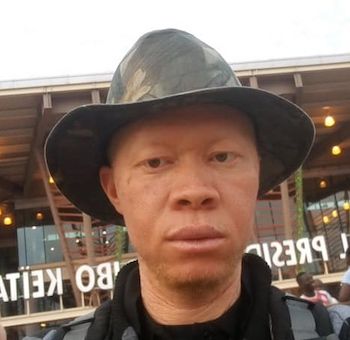 Summary: Mohamed Osman Kamara, an albino living in Sierra Leone, created the Sierra Leone Association for Persons With Albinism (SLAPWA) to advocate on behalf of albinos so that they can be free from discrimination and exclusion in society. SLAPWA also teaches people about albinism and provides prevention and treatment to albinos threatened with skin cancer. Kamara has faced constant antagonism from those who see albinos as cursed, who do not believe in helping them, and in fact who do everything they can to isolate and threaten them.

Profile: Across Africa, albinism is commonly regarded as a curse; many people even believe that certain body parts of albinos can transmit magical powers. As a result, people living with albinism in Sierra Leone have been abandoned, discriminated against, killed by family members, or sold to those who use them in rituals. Even though some legislation in Sierra Leone—specifically, the Persons with Disability Act, passed in 2011—addresses disability issues, albinos are still oppressed. The Act’s goals of prohibiting discrimination against people with disabilities and achieving equalization of opportunities for people with disabilities are far from met.

There are advocates for the disabled: Francis Kabia, a Board member of the National Commission for Persons with Disability, marked the five-year passing of the Act by saying this: “We make a passionate appeal for the enforcement of the Disability Act of 2011. The government’s Agenda for Prosperity will not be achieved if the disabled community continues to live in poverty. I tag this commemoration as a journey from words to action.”

But perhaps the person who most confronts this toxic environment is Mohamed Osman Kamara, an albino, who founded the Sierra Leone Association for Persons With Albinism (SLAPWA). Kamara has risked not only the dangers that all albinos face but more, because of his public stance. He has mounted several campaigns and outreach programs to solicit funds as well as support. With the help of medical personnel, he and SLAPWA also provide free skin cancer prevention, treatment, and supplies to albinos, who are much more vulnerable to skin cancer than are others.

Kamara occasionally uses entertainment as a means to help transform young people into change agents: With the label, “Catch Them Young, Sierra Leone”, he tours in hard-to-reach areas in the western part of Sierra Leone, bringing in youth and giving them voice. He has even rescued several children from abuse.

“We have been neglected and discriminated against for far too long,” says Kamara, pointing out that many albinos have stayed away from school in order to protect themselves. He is a member of the steering committee of the African Youth with Disability Network of Sierra Leone, which also seeks to find solutions to combat the stigma of people living with albinism. On June 13, 2019, Kamara organized a national press conference in which he appealed to the government of Sierra Leone to help the cause. Government officials, says Kamara, “do not in any way appoint somebody living with albinism to positions of trust, especially when it involves issues dealing with albinistic people.”

The anti-albino culture is difficult to combat, as Kamara knows only too well: “I have had challenges with family and community members who still regard albinism as a curse and are totally against our work in assisting the people and children with albinism.” Even Kamara’s friends have told him that he is “an albino without sense.” And the attitude pervades society. Says Kamara, “We go to most people, including institutions, for help, but . . . they shun us because of the condition we have. . . . If by any chance our women albino folks get married, their husbands abuse them, saying that marrying an albino is a favor.”

And in other countries, the situation isn’t any better: “In some other parts of the world, like Malawi, witch doctors advise men living with HIV and AIDS to look for women with our condition for them to get healed.”

Nonetheless, Kamara persists in seeking financial, governmental, and cultural changes to people’s feelings about albinos. The goal: People living with albinism should live a barrier-free life that allows them to exercise their rights and enjoy the human rights accorded to them like any “normal” human being.I

The winners are expected to represent Sierra Leone in the ‘Mr and Miss Albinism 2019’ on December 7th in Zimbabwe.

On another note, in August 2019, Kamara, after discovering Mary Gigba, a pregnant woman living with albinism and who later gave birth to twins; a baby boy and girl in Southern Bo, has successfully galvanized support for Mary to undergo skin cancer surgery in Makeni by a team of doctors from UK. The successful surgery was completed on Thursday 3rd October, 2019.

On the SLAPWA Facebook page on the same day at 7:50 PM, Kamara had this to say: “The Surgery is Successful, thanks for Prayers for Mary's well being, but still continue to pray for her speedy recovery. It was a major operation. We thank God/Allah for everything and huge thanks to Sarah Snow and Tom”.