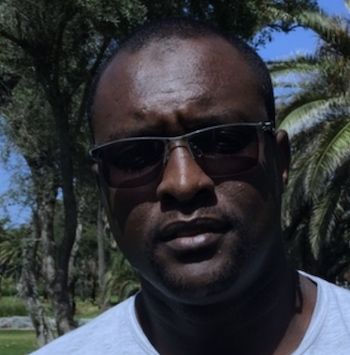 The story of Mohammed el Gharani, born 1986 in Medina, Saudi Arabia, is not totally unknown but it should be known better than it is. Throughout the ten+ years since his release from unlawful, cruel and utterly unjustified imprisonment in Guantanamo he is still being denied justice and an ordinary life. Yet this Giraffe Hero does not complain. We nominate him for the Giraffe commendation and ask everybody who can to help.

That the details are known at all is to the credit of journalist and writer Jérôme Tubiana. Jérôme traced El-Gharani down in Chad 2017 where he recorded El-Gharani’s story in meticulous detail from beginning to the present and subsequently published it as a graphic novel, co-authored with the protagonist and with artist Alexandre Franc under the title of Guantánamo Kid (French edition, Dargaud, 2018, 168p; English edition, SelfMadeHero, 2019; German edition, Carlsen, 2019; Italian edition, Il Ragazzo di Guantánamo, 2019). The book was published in seven languages, received the award of the best non-fiction graphic novel in Brussels comics book festival in 2018 and has been shortlisted for the Stan Lee Excelsior Stan Award 2020 in the UK.

A brief summary of this unending odyssey runs as follows: Mohamed El-Gharani (or Gorani) was born in 1986 or 7 in Medina where his grandparents of the Goran tribe had moved from Chad. They were leading a poor life and as of the age of seven young Mohamed had to contribute to the family’s earnings as a street vendor, unable to attend school. By the time he had become a teenager he was dreaming of a better life – for which he would need an education; but how to get one? His friend from the streets, a Pakistani whose uncle at home in Karachi was teaching kids English and IT, gave him the idea to go there, learn English and the skill to repair computers and subsequently, back in Medina open a repair shop. Against all odds he managed to obtain a false passport making him four years older than he was and enabling him to buy a plane ticket to Karachi. He was warmheartedly received indeed by the friend’s uncle and his family and schooling started immediately – El-Gharani felt like being at home enjoying the happiest time of his life. That was two months before 9/11. Shortly after the War on Terror was declared, the American government struck a deal with the Pakistanis whereby they would pay 5,000 USD for each suspect. As a result, the Pakistani forces started to lock up foreigners randomly. Mohamed El-Gharani was locked up with a group of adults when leaving the mosque after Friday prayers.

He never could be forced to confess an alleged Al-Qaida membership, neither by the Pakistanis directly after imprisonment, nor by the Americans in Afghanistan where he was held for two months nor by the henchmen of Guantanamo over a period of seven years. El-Gharani stood up to his tormentors whenever he could and whenever he had enough strength left to do so. He fought back at his torturers whenever he could, he ridiculed the arrogance and ignorance of the guards who deserved it, he blamed the interrogators for their double standards and lies – and he admired those few who had a heart and with whom he became secret friend. They almost killed him, but he did not let it happen. He became the most hated and most admired inmate – depending on whose side you stood on. He had a total of 358 disciplinary infractions (each of which were followed by harsh punishment) by the time his release was ordered on January 14th, 2009. After a total of eight years since his incarceration in Karachi he was finally removed from Guantanamo by June of that year.

And then, well, matters should have turned to a happy ending, one would assume. No. The Saudis did not grant him repatriation to his home town of Medina and only after several months of diplomatic haggling, Chad, the home nation of his grandparents, agreed to receive him. And after being flown there by American military authorities, the Chadian authorities, contrary to official promises, had him locked up again upon arrival. He managed to be set free and attempted to rebuild his life. He got married and became a father. But Chad is a poorer and more corrupt environment than the one he had fled in 2001 so Mohamed and his wife moved on to Ghana where he opened a prospering import export business. But alas, after several years the Ghanaian intelligence services went after him and forcibly sent the family back to Chad in 2017. And there, yet again, he had to flee imprisonment, this time to Nigeria where he managed to obtain provisional refugee status. The family then fled to another West African country, undisclosed for their safety...

El-Gharani, apart from struggling to survive with his family, is looking for opportunities to share his experiences in encouraging ways with schools and students alike. He also is preparing a lawsuit to fight the authorities under whom he himself and hundreds of others have endured almost a decade of unlawful incarceration and torture without ever having been granted justice. You may support him via an open crowdfunding here, run on his behalf by J. Tobiana.