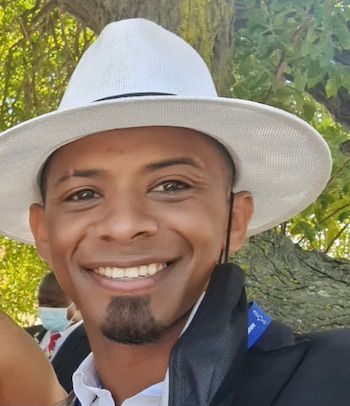 Summary: Mujahid George, a singer and actor, uses entertainment and social media to spread hope, love, and prayers for vulnerable members of his community. Through partnerships with nonprofit organisations, businesses, faith-based organisations, and other artists, George supports orphans, the sick, the elderly, flood victims and others, He risks short-changing his family commitments—and occasional threats, especially from some fellow Muslims who think he should focus his charity on his co-religionists.

Profile: Mujahid George, a performer at local and international concerts, is a popular figure in South Africa’s Cape Flats because of his charity work: He provides food, entertainment, and blankets to orphans, the elderly, and those in depressed circumstances. Using his influence as a public figure, George mobilises the business community and other artists to rally behind humanitarian causes.

Early this year, when deadly floods hit KwaZulu Natal in eastern South Africa, killing over 400 people, displacing thousands of others, and making drinking water scarce, George teamed up with Gift of Givers, a nonprofit organisation, to raise funds so that victims of the floods could have drinking water. After eight days, George’s on-line campaign succeeded in filling 10 trucks with such water—eventually 2 million litres—and delivering the water to those who needed it. Since the floods increased the risk of water-borne diseases such as typhoid, initiatives such as this went a long way toward easing yet another crisis.

George’s contributions serve many people. He teamed up with Gift of Givers again for an initiative that arranged for 40 orphans to enjoy a plane ride over the city of Cape Town. “When the world is seen from a different perspective,” says George, “the mind will shift to a positive view. My first opportunity on an aeroplane changed my life, and I hope it will do the same for them.”

George also visits homes for the elderly: “We do programmes of entertainment where we go out to different old-age homes and do our best to bring smiles to their faces. We also feed one Old Age Home as often as we can.” And he goes out of his way to support individuals in distress, e.g., a child with advanced cancer. He put on a concert that drew over 2500 people and raised funds to cover most of the child’s medical expenses. He also helped to purchase three years of nappies for a victim of cerebral palsy, and he collected and donated hundreds of blankets to children in an underprivileged school—critical items in the South African winter.

Working with the Children’s Hospital Trust, George helped secure funds to build an Emergence Centre in Cape Town’s Children’s Hospital. Why this particular place? George saw it as a memorial to the place that had saved his life after he was burned as a toddler by a kidnapper.

All this generosity has not come without a cost to his family. “Mostly,” says George, “I have to put my family time aside as I attend to community needs. It would be like I am being selfish, wanting to please everyone, and seeing to their needs before I even think of mine.”

And then there are the threats he receives on social media. Some of them are from fellow Muslims who think he should focus his charity on his co-religionists. “Why do you do all of these things and forget about your responsibility as a Muslim?” they charge. “Some get even more personal, telling me how I don’t deserve to have a family. In a world where the threat of terrorism is real, such differences with fellow Muslims constitute a real threat but George believes that “harsh remarks from the public can easily be demotivating only if one allows—and the good comments and prayers make up for all the negativity.”

George humbly gives credit to not only the people who have inspired him—his mother and wife, to name two—but also to his colleagues who have helped him along the way. His philosophy is optimistic, especially for the needy: “Whatever happens in your life is necessary for you to get to where you want to be,” he says. “Positive minds make it easier to attract positive outcomes. Be the best you can be and accept yourself…Be aware that life has so much more to offer than what the circumstances allow.”