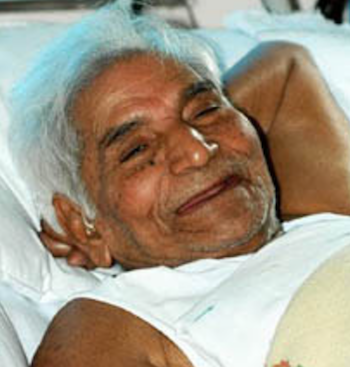 As a Brahmin in India, Murlindhar Amte was born for a privileged life, at a comfortable distance from people of the lower castes. But after becoming a lawyer, a film critic, a pal of early Hollywood luminaries and vice-president of his municipality, he suddenly made a dramatic course change.

It happened when the town's garbage collectors went on strike. Amte was helping collect trash when he came upon a heap of garbage that moved. When he saw that the heap was a leper, Amte fled in horror. During the sleepless night that followed, Amte realized that he had fallen short of the name Gandhi had given him, when he was a younger man: "Fearless Seeker." In the morning, he gave up the law and his writing, found the leper and nursed him until the man died.

In those days the fear of catching leprosy was so great that Indians would not even stand in a leper's shadow. Lepers were at the absolute bottom of the castes. Amte, the Brahmin, decided to devote his life to them, using his savings to buy land and start a commune where lepers could live and be cared for. Amte, his wife and two young sons arrived on their 25 rocky acres with six lepers, 14 rupees and an old cow. They named the place Anandwan, "the garden of joy."

Amte and the lepers tilled and fed the rocky soil until it was rich and productive. More and more lepers arrived when they heard about this place where they could find a home and useful work. "Work builds, charity destroys" is the motto of Anandwan. Within a few years the commune was self-sufficient in everything except salt, sugar and kerosene and grew to include over 2,000 lepers, plus hundreds of people who were blind or otherwise disabled.

"Baba" (father) Amte became a physician, specializing in tropical medicine, so he could give commune members the best possible care. His sons and their wives later became physicians at Anandwan as well.

Under Amte's guidance the lepers built a hospital, a school, a vocational center, a nursery and an old folks' home at Anandwan and two colleges in neighboring towns. As medical treatment of leprosy advanced, Amte expanded into other areas where he saw needs, including forestry and enviornmental projects to stop India's deforestation.

Gandhi's example set Amte on a 5,000 kilometer walk after religious conflicts climaxed in an attack on a Sikh temple in the Punjab. Amte walked to remind the nation that they were one nation, despite all differences among them.

Commended as a Giraffe when he was in his 70s, Amte was still advocating for the poor, for the outcasts and for the preservation of the earth. Even though a spinal problem prevented him from sitting up, he did not absolve himself from his own admonition: "Responsibility is not transferable."

When Amte was 86, he left Anandwan, the community he had founded, to lead villagers in central India in resisting the construction of dams that would flood their lands. His sons and daughters-in-law, all physicians, continued to provide care at Anandwan. In later years, Amte returned to Anandwan, confined to bed due to a back condition. He continued to write, talk and counsel, from his bed. He died of leukemia, in 2008. He was 94.