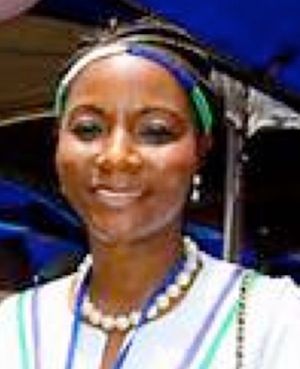 Summary. Since being raped and getting an illegal abortion as a teenager, Naasu Fofanah has fought for women’s rights. As an advisor to the President of Sierra Leone, Fofanah lobbied for a “Safe Abortion Bill” that passed Parliament twice but that the President refused to sign. For three years, she championed the bill as well as other policies supporting the rights of women. But Fofana’s activities challenged too many males with traditional values and she was removed from her post. She continues to fight for the issues she believes in.

Profile: It’s heartening to see someone transform a personal misfortune into a way to help others.

That’s what Naasu Fofanah has done. When she was 15 years old, Fofanah was raped by her church pastor. Her mother helped her get an abortion. Abortions are illegal in Sierra Leone, which means that many girls and women suffer—sometimes fatally—from mishandled abortions. That’s the situation that Fofanah has sought to change.

She has come close. In 2012, Fofanah was appointed as an advisor to the President of Sierra Leone on gender and women’s issues. She worked hard, making sure that women’s issues were considered in all government planning. This work seemed to culminate in 2014 with the “Safe Abortion Bill”, which would have allowed access to an abortion during the first 12 weeks of pregnancy or the first 24 weeks in cases of rape, incest, or health risk to the fetus or the mother. The proposal received endorsements from both the African Union and the United Nations, but it was slammed by Sierra Leone’s conservative religious leaders.

Despite the fact that the bill passed Parliament twice, both times with more than a veto-proof two-thirds majority, Sierra Leone’s President Ernest Bai Koroma has refused to sign the bill. He claims that the bill runs counter to the country’s Constitution but others say he’s currying favor with powerful religious leaders in order to stay in power after his two-term limit runs out in 2018. Ibrahim Tommy, Executive Director of Sierra Leone’s Centre of Accountability and Rule of Law, thinks “it’s more about politics than any moral and religious convictions.”

In May 2015, Fofanah was asked to leave her position in the government. The official explanation was that she’d been interfering with realms of government that did not concern her, causing rifts between the State House and the Presidency. The unofficial explanation? In her fights for women’s rights, Fofanah had continuously spoken and acted against some of the traditional males in the government and elsewhere—males who didn’t like being challenged by women, particularly strong-minded, responsible, capable women. One example: Fofanah had refused to include a senior male colleague in the President's entourage while going on a foreign trip because the colleague was reported to have been violent toward his wife. In many circles, that behavior is acceptable; to Fofanah, it was inexcusable.

Fofanah herself has no delusions about why her career in government ended: “During my work, I had stepped on so many toes just to push forward the gender parity dream.”

Naasu Fofanah now heads an organization called Women of Wanjama (WOW). She still fights against sexual violence and for female empowerment, and she’s very angry that the abortion bill did not come into law. “That,” she says, referring to her own past as much as other girls’ futures, “is the choice I want other girls and women to be able to make.”