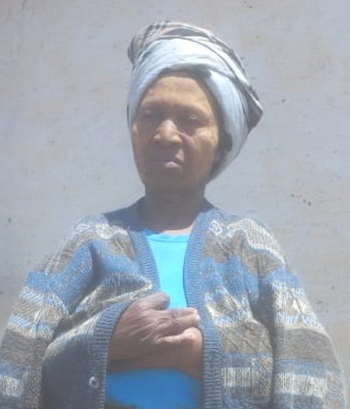 Summary: This is Nomabelu Violet Maliwa, an elderly woman from Ezingqolweni. Her neighbours say she has a kind heart. When villagers of Ezingqolweni near Cacadu formerly known as Lady Frere, were brutally attacked and killed by unknown serial killers during a spate of violent killings that claimed the lives of 11 people, Maliwa had no idea that she would become the Messiah and Saviour of her people who took refuge in her house during the six months killing spree. This did not come without costs. She used her little resources to accommodate her neighbours, some of them were not related to her. Maliwa was warned not to accommodate one of the woman who was reportedly targeted- a shabeen owner, but she reasoned that it was not good to expose a fellow human being to danger and that it would be against the values of Ubuntu. She chose to accommodate her at the expense of her own security and that of her family at a time when others shut their doors for fear of retribution, and economic reasons.

Profile: In December 2020 when the world was commemorating the 16 days of activism against gender based violence, a man in his early 50s was killed, becoming the first victim of a series of ruthless attacks that lasted for about six months, claiming 11 lives most of them elderly women, in Ezingqolweni, a remote subsistence farming community of about 95 households, 67 Kilometres Northeast of Queenstown. Starting in December 2020 and ending in July 2021, the cold blooded killings left the community in panic, mistrust and suspicion.

Police report say, three men and eight women - all elderly people mostly staying alone and some with their young grand children were killed.

The reasons for the killings is still a mystery. Some say the elderly had Alzheimer and dementia and were suspected of witchcraft, whilst others say it is the work of Amaphara (drug addicts) who wanted their monthly social grants to buy drugs.

But Maliwa and her community members have a different view, ' There is no evidence to support that, since none was arrested to prove any of the claims. If the police had done their job we could be knowing the reason for the killings.''

Cases of police failing to bring perpetrators of crime to book, is a common feature in South Africa's justice delivery system.

The killings which were conducted in the middle of the night targeting mainly elderly women, sent shock waves across South Africa.

Over 40 people mostly elderly persons were displaced becoming probably the first time when a local community faced internal displacement of such magnitude since apartheid.

Yet the Older Persons Act 13 of 2006 aims to maintain and promote the status, wellbeing, safety, and security of senior citizens, while the 1991 United Nations Principles of Older Persons reiterate the need for communities and nation states to ensure the safety of Older persons.

When others were fleeing for safety, some going as far as Cape Town and Johannesburg, Maliwa chose to stay with her ailing husband, choosing to die than to leave her unwell husband alone. Her husband had suffered a stroke the previous year.

At a time when others shut their doors for fear of retribution, privacy and economic factors, and even abandoned their loved ones, Maliwa had none of these.

In February last year following the cold blooded murder of two elderly women the same night, Maliwa mobilised her neighbours to come and live together at her house. These were women- elderly and middle aged- mostly living alone or with their children, and young grandchildren and possibly the targets of the vigilantes.

Maliwa learnt of caring for others when she was young. Maliwa said she was only 13 when she took care of her unwell mother. Her mother wanted her to be a nurse, because of her caring heart.

' I nursed my mother who was not feeling well when I was 13. My mother said, 'you can go and do nursing because of the way you treat me,’ said Maliwa.

Since the killings were taking place in the middle of the night, 'They came at night. Those who came without eating we would share what we had,' said Maliwa.

Her house located in the margin of the settlement became a place of safety for her neighbours for a period of about six months, sharing the little that she had.

A traditional African family, her 3 houses were loosely fenced and the room where they slept's two windows and the door had iron baglabars. She had bought the baglabars using her money and hired a welder to put them to increase security.

Maliwa said she shared her bedroom with them- her husband on the bed, herself on the floor with other women and the children. She had taken the matress from her grand children so that she could share with the women.

Armed with an Umkhonto, a defensive shield mostly used by men according to Xhosa culture, Maliwa and her colleagues took turns to sleep. It was not easy.

They had to lock the door from inside and put an Umkhonto at the door, hoping that her sick husband in case of danger would wake up and attack the intruders. Maliwa said they locked the main gate before dusk.

One of the woman was a shabeen owner reportedly targeted by the suspected killers. The others were middle aged and elderly women with children.

Maliwa was among the few who had the courage to open her doors to others at a time of crisis, and at times at a cost and risking her life and that of her family from the invisible enemy.

Gcinikhaya Koki, a community leader in Ezingqolweni, says that Maliwa displayed extraordinary acts of courage at a time when it was unusual to do so, and when it was difficult to trust even a neighbour.

“There is a woman in this village (Maliwa) who brought her neighbours together at the climax of the killings. They would come together at night at her house- at times as many as 12. And this shows a good heart, because we don’t have many such people, especially at a time of great mistrust,” said Koki.

Up to this day no one certainly knows the reason for the killings and no one was arrested despite the seriousness of the case.

Maliwa and her community members say the police advised them to identify the killers.

In recent years, in Gauteng and Limpopo, elderly women were burnt alive, accused of witchcraft.

Yet article 8 of the Protocol to the African Charter on Human and People's Rights commits to take measures to eliminate harmful traditional practices including witchcraft accusations , which affect the welfare, health, life and dignity of older persons, particularly older women.

Maliwa and her neighbours, think the police could have done more to arrest the situation, blaming police inaction for the massacre.

' We dont have the police. We trust ourselves. When we call our neighbours they come and help us. We dont trust the police anymore,' Maliwa said.

Maliwa said that in February the police were on duty when 4 people were killed on a single night ( 2 elderly women and a couple).

In South Africa, police failure to arrest criminals has often led to cases of mob justice as citizens become impatient.

Maliwa's acts of humanity and courage was shown when she resisted threats for accommodating one of the woman, a shabeen owner reportedly hunted by the suspected killers. But Maliwa maintained that it would be inhuman and against her values to expose her.

'I would not turn her away because of that for in the event that they killed her I would not feel well. I would feel bad. If I had said go back and she is attacked, how would I feel? If we were to die we could rather die together,” said Maliwa.

The soft spoken 68 years old admits her commitment and love for humanity.

'I love people. I want to do good things to people who are around me. I will not treat another human being badly' said Maliwa.