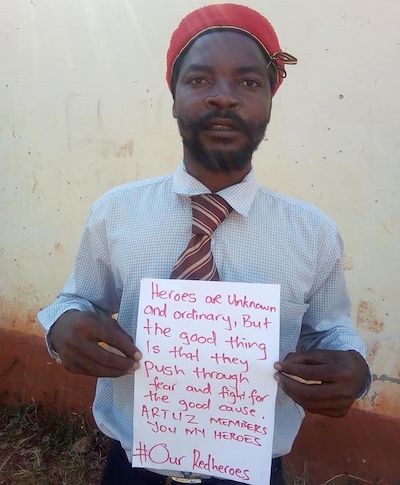 Summary.Robson Chere, a teacher and trade unionist in Zimbabwe has been arrested several times by the police for calling on the government to pay rural teachers a decent salary and improve their working conditions. “I will not just stand and watch myself and my comrades dying from man-made poverty,” he says, but I choose to speak out. My colleagues in rural education selected me to lead, and this duty I will execute.”

Profile.HARARE- Robson Chere, a teacher and trade unionist in Zimbabwe has been arrested several times by the police for calling on the government to pay rural teachers a decent salary and improve their working conditions.

Chere is the secretary general of the Amalgamated Rural Teachers Union of Zimbabwe (ARTUZ) which has complained about poor wages being paid to teachers, lack of electricity in rural schools and poor working conditions as well as unsafe learning conditions for students.

He together with a dozen other teachers embarked on a 266 km march dubbed “Salary Caravan March” from Zimbabwe’s eastern city of Mutare to the country’s capital Harare to press for the government to pay teachers in US dollars and to improve their working conditions.

The group was arrested and detained several times during that march in December last year. His employer, the government , charged him with misconduct and suspended his salary which the ARTUZ calls a “brazen attempt” to fire him from his job.

Chere was arrested twice during the march.

He was also abducted and detained by police in January during the mass stay away over the worsening economic crisis after government hiked the prices of fuel which led to increase in prices of basic commodities.

At least 17 people were killed during the protests after the army opened fire on protesters.

Despite all the persecution, Chere remains determined to fight and demand teacher’s rights.

“I have a conviction that if I see bad things happening and decide to be silent it also means I will be doing harm to myself, my fellow working class community and the future generations,” Chere said in his weekly communication on the ARTUZ website.

“I will not just stand and watch myself and my comrades dying from man-made poverty,” he says, “but I choose to speak out. My colleagues in rural education selected me to lead, and this duty I will execute. Comrades worry not I will be on the forefront in this battle so if it’s a sword or a bullet against our non-violent struggle for demanding a Living Wage it has to pass through me first. We must all realize that our struggle is not a sympathy seeking struggle but a reality.”

The firebrand unionist called on teachers to continue demanding their rights and not to suffer in silence.

“We must all know that in this world we live to die. I urge all of you not to wait to die of hunger. If we don’t do something now to demand our Living Wage as workers we are all going to die in a condition where one cannot be able to lift his/her hand because of hunger,” he said.

“Workers are human beings; they deserve their dignity by being given dignified salaries. The general citizens are also equally important, our peasant farmers, our youths, in short every citizen is equally important.”

Chere for his efforts in fighting for teacher’s rights was elected into the Citizen Cabinet, as the Minister of Education.

The Citizen Cabinet was formed after the disputed general elections by citizens to help build a better Zimbabwe.

On Wednesday April 10, 2019, Zimbabwe’s teacher’s embarked on a “Red Campaign” urging people to dress in red to salute people like Chere whose name features prominently among dozens of teachers who are being celebrated for their bravery in standing for their rights.

Chere follows in the footsteps of ARTUZ president, Obert Masaraure, who has already been featured on this site as a Giraffe Hero.