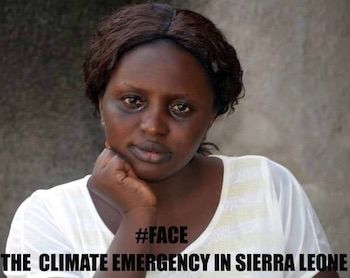 Summary: Roseline Mansaray is a young climate and environmental activist in Sierra Leone who mobilizes young people to fight for action on climate change. In 2020 Mansaray founded Fridays for Future Sierra Leone, whose goal is to raise attention to the crisis and influence policies that counter it. Despite on-line harassment, scarce resources, and reluctance of the government to act, Mansaray vows to continue campaigning.

Profile: Roseline Mansaray is a young climate and environmental activist in Sierra Leone who mobilizes young people to fight for action on climate change. She recognized early on that climate change is an emergency, not only in her home country of Sierra Leone but everywhere: floods, landslides, drought, temperature rise, sea level rise, and deforestation affect everyone.

In January 2020 Mansaray founded Fridays for Future Sierra Leone, an organization for young people to raise people’s awareness of the climate crisis, influence policy, and take action in their communities, including staging strikes.

Since then, she has inspired more than 2,500 young people to do just that. One example: On June 5, 2021, she organized a climate strike in Gish International School near Makeni in northern Sierra Leone, demanding action on the worsening deforestation in the country. She seized the opportunity to address hundreds of students, highlighting the dangers of climate change and the role of young people in addressing it. She shared her discoveries that urbanization, mining, quarrying, agriculture, slash-and-burn farming, and firewood and timber production are all contributing to the deforestation.

According to the Inter-Governmental Panel on Climate Change (IPCC), Sierra Leone is ranked as the third most vulnerable country to climate change disasters across the world. And it is all too obvious that the country continues to experience increasingly adverse impacts of climate change in almost all sectors.

“I have tasted the bitterness of climate change,” says Mansaray. “I once resided in a community called Kroo Bay Freetown, Sierra Leone, and each time I try to narrate this experience, I cannot hold my tears.”

As one of the disaster-prone areas in Freetown, Kroo Bay is in a coastal zone subject to increased storms and flooding, storm surges, landslides, drought, high temperatures and fires, all made worse by climate change and causing huge losses to the coastal dwellers. When these disasters strike, people lose their lives while survivors are made homeless especially with the floods and fire disasters. This makes them poorer and in dire need of food and shelter. Young girls who survive but whose parents die as a result of climate disasters end up as prostitutes in central Freetown in order to earn a living. This happened, for example, after a March 2021 fire disaster in a slum community known as Susan's Bay which left thousands affected.

“This is why I am striking,” says Mansaray: “to raise attention and awareness towards climate crisis and its consequences.” With all the bad experiences and trauma she sees as a result of climate disasters, coupled with the lack of adequate action from government, Mansaray just can’t stop striking and calling on government to act. Mansaray says she is inspired by the young Swedish climate activist Greta Thunberg to keep speaking out to focus attention on climate change and environmental pollution.

It’s not easy. “When I mobilize youths with placards demanding actions through strikes, we are mostly interrogated and shunned by the onlooking public,” she says. “This is because most people are unaware about climate change actions. But I am not deterred.”

The outbreak of the Covid-19 has restricted movements, including with the many youth networks Mansaray has established. So she uses digital channels like Youth Voices for Climate to call upon youth-led networks in sister countries to share their experiences and thoughts on climate change issues with Fridays for Future Sierra Leone.

Though Mansaray has not faced any physical attacks related to her work, cyberbullying has been increasing, including the blocking of her posts and on-line accounts. She also struggles with finances, funding most of her activities from her own meager resources. And the government of Sierra Leone is not very responsive to her demands for action.

“We are tired of empty promises,” says Mansaray. “We need urgent climate action. We need to make climate change a priority in the national development plans. . . . If our leaders take concrete steps to combat the climate crisis before the year 2030, the world will be a better place, but if they keep making empty promises like they are doing, then the effects of climate change will be irreversible.

As far as being ignored by Sierra Leonean officials and the general public, Mansaray is resolute in making a difference: “In Sierra Leone people are really ignoring the issue of climate change, but now environmental degradation and rampant deforestation are becoming alarming. That is why I encourage myself daily; I know I will not keep quiet and sit down. I will spread awareness and educate people.

“I will never quit or sit back,” she says. “I will keep on calling on everyone including government to come on board and take action.”

Roseline Mansaray holds a bachelor’s degree in Business Administration from Kampala International University in Uganda. She later took classes on climate change and youth participation at the Young Africa Leaders Initiative (YALI), a U. S. Government effort that invests in the next generation of African leaders.