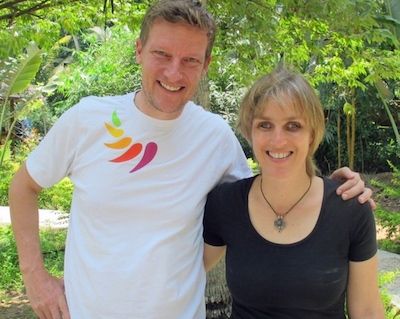 Summary: Sabriye Tenberken, who is blind, left the welfare and protection of Germany to go to Tibet and, together with her partner Paul Kronenberg, set-up a school for the blind in the heartland of Tantra Buddhism – where blind people used to be confined to the fringes of society since it is believed that they are suffering in return for a crime from past existence. Paul got locked up by the Chinese authorities, but was released later. Next the pair set up "Braille without Borders" so as to give the blind community globally an international online helpline.

Profile. Kerala (South India), March 2020. As if it were the most normal thing on earth Sabriye Tenberken walks straight across the dining hall and through a small, narrow corridor into the kitchen. Without hesitating for a second. From time to time she snaps her fingers. Why? Sabriye is blind and she uses the echo to find her way.

But even more impressive is the fact that she goes through life in the same determined and confident way. Sabriye is German of origin and has an incredible intrinsic drive to change the world for the better and help others, since she knows exactly how it is to be marginalized. Together with Paul Kronenberg she founded the first school for blind children in Tibet after having completed her studies in Central Asian Sciences and Tibetology. In Tibet, it is commonly thought that blind people must have done a sin in their former lives and therefore, they are being punished. For Sabriye and Paul it is no question that blind people are equal human beings and that they should get the same chances in life.

Next the pair set up "Braille without Borders" so as to give the blind community globally an international online helpline.

As you can imagine, building up this school and Braille without Borders was no bed of roses. They had to leave everything behind—against the advice of family and friends—and take the risk of being stranded in a completely unknown environment where the general mindset couldn’t be more contrary to their own. Especially for Sabriye this was a challenge because people in Europe tend to overprotect the blind. But she wanted to be completely independent and give all her resources to help others to gain the same independence, no matter if handicapped or not.

However, the two of them were not only confronted with head winds from home, but also from Tibet. On one side, the Chinese government was giving them a very hard time and they had to go through a lot of bureaucracy—in Chinese of course—and once Paul was even temporarily arrested without reason. On the other side the villagers looked at them as if they were aliens. Nevertheless, they went on, step by step.

Paul is a Dutch engineer and expert for commercial technology, data-communication and computer science. But his competences are even broader. His wide-ranging knowledge covers ecofriendly architecture as well as management and, furthermore, he is an outstanding speaker who convinces his audiences with humor and competence.

For the ambitious duo the school and Braille without Borders wasn’t enough; they had more visions. So, they created “Kanthari” in 2005, a movement for social change in Kerala. It is a hotspot for big dreamers, like-minded people who aren’t afraid of trying to turn their dreams into reality. Sabriye and Paul developed a special 12-month curriculum, a “journey in five acts” which gives participants all the tools they need to start and run their own social projects. At the moment there are more than 140 active Kanthari projects in over 40 countries worldwide. Obviously, it would be impossible to keep track of so many projects without long giraffe neck. If you want to know the meaning of the word “kanthari” you will find the answer on kanthari.org.

Sabriye and Paul are a virtuous duo of “mountaineers” finding out new, unsecured climbing paths that nobody has tested before. Abysses that scared a lot of other people and made them turn around were a solvable challenge for them. They show us how to go to the maximum, how to jump over a precipice and act instead of being discouraged by the thousands of reasons than might prevent us from doing it. They are masters in turning disadvantages into advantages and in making the best out of the given ingredients. Where there is a will, there is a way!

Sabriye is a real role model when it comes to filling an unknown black space with imagination and phantasy instead of being afraid of it. This is a valuable quality for everyone, since we are all blind for the future, especially in these times of Corona.

But even if future is unknown and now additionally enveloped by a mist of uncertainty, what do we have to fear, if we are accompanied by such visionary beacons?

We can look forward to it with curiosity and confidence!