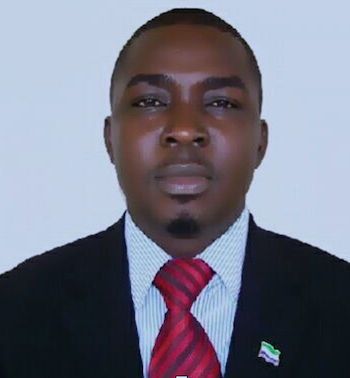 Sahr Kendema is a brave Sierra Leone activist who has for years led efforts toward poverty alleviation, good governance, security, nonviolence, social cohesion, and the end of money laundering in his country. In 2018, for example, leading up to parliamentary and general elections in Sierra Leone, Kendema took considerable risks to speak publicly against the manipulation of systems and processes involved in the elections.

On February 5, 2020, his organization, Campaign for Good Governance (CGG) published a statement calling on the Sierra Leone government to take urgent, lawful, and thorough steps to curb the rising level of violence in the country. Kendema was particularly troubled by the often high-handed and improper behavior by some personnel of the Sierra Leone Police and called on the government to ensure that the principles of fair policing, rule of law, and proportionality were adhered to under all circumstances:

Similarly, Kendema is frustrated by the double standards of political parties. As he puts it " With the kind of work we do as activists, opposition politicians will hail you when you pick on thorny issues of bad governance while in opposition and will even send you commendations, but once they grab political power, they in turn detests those same things they once supported", he explained.

Given the risks of his activism, Kendema says he sometimes lives in fear for the life of his family. He believes that his kind of work attracts malice meant for him to his immediate family, including his daughter. "Maybe no one can reach me, but those who abhor my work can try hurting my kid", he says.

Kendema has taken risks from a very early age, starting as a young student activist at the University of Sierra Leone who once found himself in a student protest that led to the expulsion of many of his university colleagues. In 2010 he became the Programme Manager for CGG, a position he still holds.

In January 2015, Kendema became interim chairperson of West Africa Civil Society Forum (WACSOF), a platform for improving the state of civil servants and governments across the 15 states of West Africa. The organization is charged with channeling civil society energies toward complementing regional integration and development. With the help of his peers, Kendema reactivated the operations of the WACSOF-Sierra Leone chapter on leadership skills and registered civil society organizations to be members.

Other African countries—Ghana, Senegal, Cameroon, Nigeria—copied Kendema’s model of leadership building. Says Kendema, “We conducted free and fair elections for the current executive to encourage working together and addressing challenges.” He believes that democratic good governance, rule of law, and nonviolence should be entrenched in African societies in order to be able to solve community and state problems.

The following year, Kendema supported an advocacy that focused on gender and women’s empowerment, which was later developed by the Gender Ministry and was launched at the end of 2020. To make this initiative more impactful, CGG contributed to the enactment of the Bill by engaging women in Port Loko, Bombali, Bo, Kenema, and Freetown. Through Kendema’s and CGG’s advocacy, the bill has received cabinet approval from the government of Sierra Leone. When it is passed into law, it will enable women to be much more productive and would also open up spaces in the country for women to participate in the government and to have access to loans.

In Sierra Leone, where many illegal acts by state institutions such as the police are visible, Kendema remains determined to improve those institutions. Regardless of the challenges and dangers involved in running his projects, Kendema enjoys his work, seeing people’s lives changing for the better.

Kendema is a graduate of Political Science from Fourah Bay College. He also holds a MSc. in Diplomacy and International Relations from the same University, and a M.A in International Development from Maynooth University, Ireland.