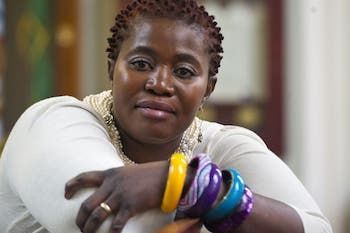 Summary: Sarian Karim Kamara is an activist for women’s rights with a focus on Female Genital Mutilation (FGM), which she experienced as a child in her home country of Sierra Leone. She works very closely with communities to end FGM in Sierra Leone and in her current home in the United Kingdom. In 2017, she founded Keep the Drums Lose the Knife (KDLK) to help coordinate efforts to address FGM in Sierra Leone, the UK, and elsewhere. She runs educational workshops for professionals and communities as well as weekly support groups for FGM survivors. Over the last few years, despite vandalism and other attacks, Kamara has educated hundreds of women on their rights and helped them understand the harmful practice of FGM. She is currently partnering with other organizations to challenge inequalities and injustices against women.

Profile: Sarian Karim Kamara has fought for women’s rights in Sierra Leone and the United Kingdom for virtually her entire life. Kamara experienced Female Genital Mutilation (FGM) as a child in Sierra Leone and has spoken about it bravely and openly. She organizes educational workshops for professionals and communities as well as weekly support groups for survivors of FGM.

FGM destroys female genital tissue and has lasting mental and physical repercussions for the women who have undergone it. The procedure is typically performed on girls and babies. According to the World Health Organization, more than 200 million women alive today have undergone FGM, and UNICEF estimates that figure to include 90 percent of the girls and women in Sierra Leone. Sadly, the practice is spreading, despite a 2012 U.N. resolution calling for a worldwide ban.

From childhood, Kamara has nurtured a personal interest in ending FGM. She was cut at the age of 11. “I was really, really excited,” she remembers. “I thought it was going to be like a baptism. But to my surprise, I was forcefully pinioned on the floor, my legs were spread apart, and the largest women among them sat on my chest. I screamed so loud that the women could not suppress my voice. . . . I’ll never forget what happened to me. . . . I’ve had five children, and none of my labour pains compared to the pain I went through on that day. It’s indescribable.”

Kamara has made sure that her voice will continue to not be suppressed. She has collaborated with the Home Office in the UK to stop FGM and regularly attends meetings and takes part in communication campaigns. In 2014, Prime Minister Theresa May wrote to Kamara:

“Female genital mutilation is an abhorrent crime against women and girls, and you have shown incredible bravery in speaking out about your own experience. In doing so, you are inspiring and helping other survivors and ensuring open dialogue about this issue. Your work in the UK and Sierra Leone is invaluable in educating young people about this barbaric practice, and I wish you every success as you continue your campaign.”

In 2017, Kamara founded and began to run Keep the Drums Lose the Knife (KDLK). “It was my utmost desire,” she says, “to empower women in my country by raising awareness on FGM and help them aspire to be whatever they want to be. In a male-dominated society where it’s not quite conducive for the girl child to freely express or partake in community discussions, educating young women about their rights and how they break through patriarchy is key in forging a better future for women.”

KDLK has currently reached over 1,000 young women in Europe and Africa with its educational campaigns. Again, Kamara: “One of the greatest achievements of KDLK is raising social consciousness of young women and girls through education. Sierra Leone has now domesticated the Maputo Protocol, which emphasizes consent before age 18 to enable women to make a decision to either go through FGM or not.”

Through her organization, Kamara not only works to end FGM but also educates women and the wider communities on the risks involved: “It’s important for our society to realize that when they continue to cut women . . . they end up creating an unending psychological problem for them.”

In 2017 Kamara self-financed several trips to Sierra Leone and ran empowering educational workshops for young people, in addition to working with communities to develop a rite of passage to replace FGM. Given the fact that many young women in rural communities in Sierra Leone are either forced or tricked into going through the initiation, KDLK has continued to make inroads in ensuring that the practice is banned. As one might expect in a country where traditional practices such as FGM flourish and speaking against it is taboo, Kamara’s efforts have been met with serious setbacks. Many of the women who come to Kamara fear extradition from their communities if they speak about their FGM experiences. “They really want to talk,” says Kamara. “They just need a safe platform.” Kamara herself has been threatened and her work station vandalized.

Despite the negativity, there have been many successes, including the development of “safe spaces” in Kambia and Bombali Districts. In 2021, KDLK joined other organizations to sponsor the “Wati Kura” initiative, a breakthrough moment in anti-FGM activism. The initiative supports grassroots movements to leverage their collective voices and action to challenge the values, narratives, and institutions that perpetuate FGM in Sierra Leone.

“Some people might think that FGM is just a cultural practice, that it is normal or acceptable for some communities. But it is not acceptable because it causes so much physical and psychological harm and has no benefit at all.”