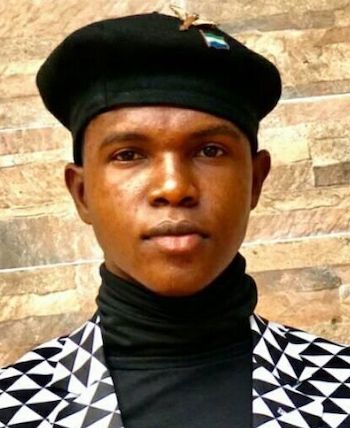 Summary: Solomon Smart Bangura is a young Sierra Leonean activist against violence, focusing on schools, gangs, and the dangers toward girls. He co-founded the National Secondary School News Network and has worked with other groups to enlighten the public on how to stop violence. Because of his advocacy, he has been threatened numerous times by gangs and school officials; he has even been banned by certain radio stations. However, he continues lobbying gangs, fostering school campaigns, speaking on the radio and before groups, and writing, all the while pursuing his studies at the University of Sierra Leone.

Profile: The Civil War in Sierra Leone lasted for a decade, and became infamous for the atrocities committed and for the large numbers of child combatants. Eighteen Years have now passed since the fighting ended but in Sierra Leone, especially in the overcrowded capital city of Freetown, levels of violence—including murders, armed robberies, muggings, rapes, and domestic violence—especially amongst young persons, remain disturbingly high, rooted in the way the war shaped people’s lives and society.

Violence among school-aged youth threatens to become Sierra Leone’s number-one social problem if not tackled. The problem is worse for girls. There are laws against violence against women in Sierra Leone but the blatant persistence of such violence still poses serious problems, affecting and limiting the ability of women to contribute to society and development. A United Nations study indicated that nearly all females in Sierra Leone will suffer some form of violence in their lifetimes.

One of the people determined to stem this violence is college student Solomon Bangura. Bangura grew up poor and was aware of the effects of violence, resolving in high school to do something about it. He has since joined others to enlighten Sierra Leone’s young people about violence and how to stop it, co-founding the National Secondary School News Network and working with Students Against Violence Everywhere-Sierra Leone, Good Deeds-Sierra Leone, and the Professor Lumumba Foundation.

Bangura helps conduct awareness campaigns as well as push for penal laws for perpetrators of violence against young people, especially young girls. “Radio campaigns can liberate the minds of young people,” he says, “and that’s why we have been advocating heavily in the media about violence among young people including any form of exploitation against them.”

Getting the job done is not easy. Again, from Bangura: “We have a redress system for violence in Sierra Leone, but to make it work requires more awareness.” In addition to using his community radio and school campaigns to get his message out, Bangura meets with gangs in poor communities and tries to forge peaceful co-existence between them and their neighbors.

Bangura’s activism, as you might expect, doesn’t seat well with some groups, for example, cliques and gangs. In particular, when he conducts community as well as radio awareness campaigns in rural and slum communities, they let him know their view that the world would be better off without him. In 2017, for example, he and his colleagues were chased out of a town where he was conducting a radio campaign on extortion and harassment against girls. Nonetheless, he is not intimidated.

It’s not only gangs that react negatively: Bangura was threatened by people in his former school where he exposed corrupt practices. He has even been banned from speaking on several community radio stations because of his activism.

Bangura has received several awards for his fight against violence, including the Kofi Annan Ambassador of Peace Award 2019. He has also been recognized for his Amazon book of poems and short stories, The Many Pains of Africa. His upcoming book, Once a Village Boy, promises to be at least as popular.

Solomon Bangura remains positive despite the obstacles: “I will keep on advocating towards a violence-free Sierra Leone and girls’ rights, irrespective of the hurdles that permeate the series of efforts I make every day.”