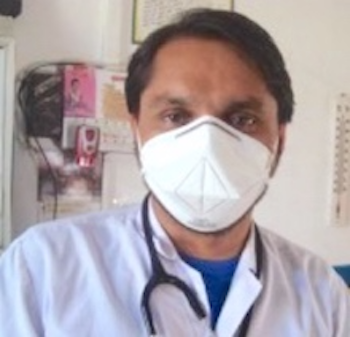 While he was a medical student in China, a young Nepalese man started a global Internet campaign for peace. There was a civil war in his country at the time, his own family had to flee for their lives, and he felt he "had to do something."

That was late 2004. After four years of incessant crusading, Dr. Sushil Koirala returned home and committed himself fulltime to Peace for Nepal, a non-profit organization that has held more than sixty national events and rallies promoting peace and democracy. In that same time Koirala played an important role in shaping Nepal's new constitution, organizing people in villages and towns to contribute their ideas to that document, which ended the monarchy and launched Nepal as a new democracy.

One of the inspirational efforts Koirala created is the Rose Movement for World Peace, in which people in conflict areas exchange roses. "I feel very strongly," the doctor says, "that it shouldn't be guns and war but roses and peace that bring change and revolution to our world." https://www.youtube.com/watch?v=2Jff6DEUGPY

"The rose is a universal symbol," Koirala has said. "It appeals equally to everyone's heart. No matter what color a rose may be, it is still a rose, and likewise we are all human beings first." Exchanging roses, he added, reminds us of the oneness of the human family. Koirala has organized rallies to exchange roses in Nepal, India, Italy, the Philippines and Switzerland. https://www.ilepfederation.org/news-item/flower-power-how-roses-have-become-a-powerful-weapon-in-the-battle-against-stigma/

It was along the then tension-filled border between Nepal and India that the Rose Movement had its most visible success to date. One sunny afternoon in January 2010, Koirala entered the most disputatious area, the Jamunaha border point, literally stepping into the breach with his roses. He recalls the day with quiet satisfaction: "There were hundreds of Nepalese and Indian citizens, hoisting flags, singing anthems and exchanging roses with each other in a bid for peace and harmony. The publicity and coverage of this historic event was huge, and the movement contributed significantly to calming tensions along the border. It was a momentous day for peace in Nepal."

For his own safety, Koirala has often been asked by family and friends not to speak about the actions of certain groups, not to speak at certain times or in certain rallies. Again and again, he has ignored those pleas, going into potentially dangerous situations. Once he was surrounded by hundreds of people threatening him with sticks and batons; at the last moment police stepped in and saved him.

One of Koirala's struggles has been to sustain himself financially while doing his work for peace and social justice. He has often used his personal resources to promote peace and wellbeing in his country. As he says, "There have been times when I have struggled to sustain myself. But I refuse to give up because the need for peace is an issue we can ignore no longer."

To Koirala, "peace" includes any number of related issues he's working on—stopping dowry murders and witch burnings, protecting the environment, and bringing about changes in his country's national health policy. In 2009, during the Swine Flu pandemic, he arranged to purchase and distribute 5,000 surgical masks, organizing an awareness campaign in Nepalganj, the town where he lives and works. For him, it's all related.

"While we are focused on peace in Nepal," says Sushil Koirala, "we're also supporting global issues such as human rights, the environment, and health. We must strive for a fair and just peace."

Update April 2020: Koirala has once again stepped forward, now speaking out as the pandemic approaches Nepal. He’s been working for several years to stop a drug-resistant TB, and to care for patients with leprosy or HIV. While caring for patients, he also advocates agains their stigmatizaiton. He was at the fore when a huge earthquake devastated Nepal and now he’s challenging his government’s preparations for the spread of the coronavirus, calling them inadequate and calling for stronger preparations.