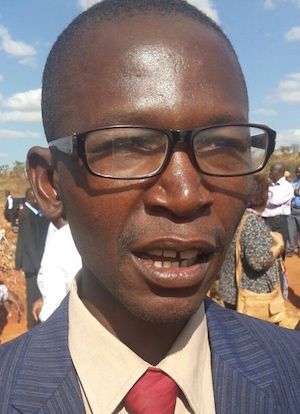 Summary: Artist Tafadzwa Muzondo transformed an old, dirty foot bridge into a scintillating arts center and educational site for the town of Highfield’s troubled youth. Though one of Muzondo’s controversial plays was banned by the government, and two others shut down, he continues undeterred.

Muzondo is the founder of the “Edzai Nesu” (Try Us) Theatre group in Highfield, a suburb of Harare, Zimbabwe. Highfield is crowded and poor, with high levels of unemployment and drug use, particularly among the young. Muzondo wanted to clean up Highfield; he wanted to keep its young people off drugs and off the streets. So he conducted a campaign. He secured funds and workers to transform an old, dirty foot bridge near a shopping center into a beautiful art center. The center is now the site of meetings, forums, and other activities, many of them focused on helping young people get critical information about health and government.

“I am very passionate about arts in the country,” says Muzondo, “and I believe in working with young people; hence, the greater need to empower them culturally and emotionally. Through Edzai Nesu, I have groomed many young people into being responsible citizens and will continue doing so.”

But such grooming does not always sit well with the government. For example, in 2012, the Censorship Board banned a play he produced, and the police enforced that ban. The play, “No Voice, No Choice,” dramatized strategies that promoted peace. However, the Censorship Board told Muzondo that the play “is inciteful and against the spirit of national healing and reconciliation”—this despite the play having been well received in other African countries and having been nominated for a National Arts Merit Award.

Recently, Muzondo was detained twice for his provocative plays; once for hours at Highfield Police station after he had staged a play highlighting the impact of police brutality in the community; and a second time for a performance that focused on police corruption. Perhaps not surprisingly, neither play was staged with a police clearance, a necessary requirement.

Muzondo is not deterred; it’s not the first time he’s encountered obstacles with Zimbabwe’s rulers, and it probably won’t be the last. Meanwhile, the Highfield Bridge—now the Arts Center—is a monument to his efforts and his accomplishments. “The bridge,” says Muzondo, “is going to be instrumental in the facilitation of dialog between the residents and the authorities.”

‘It has not been an easy journey as some of our projects are sabotaged and currently we are facing a tough challenge from some rowdy youths who want to take control of the bridge—but who were nowhere to be seen to help with the hard work of cleaning the site whe it was littered with dirt and garbage, including human waste.”