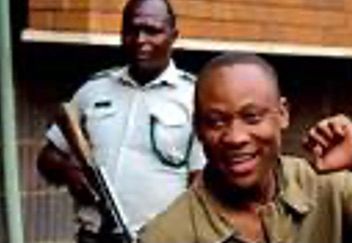 Summary: Takudzwa Ngadziore is a human rights activist and President of the Zimbabwe National Students Union (ZINASU). He has been imprisoned and beaten up by the police on numerous occasions for standing up for the rights of students in Zimbabwe’s institutions. At 21, Ngadziore continues to risk persecution and even death at the hands of state security agents who are swift to descend on democratic voices that fight for change in the country.

Profile: Universities and colleges in Zimbabwe are facing serious operational challenges, including poorly maintained infrastructure and learning facilities. This has led to the plummeting of standards. In addition, every semester students struggle to get by financially, as the Zimbabwe government has ceased granting them access to loans.

The Zimbabwe National Students Union—ZINASU—is the largest independent student body in the country, and for years it has been fighting for a better educational environment. In 2003 it received the Norwegian Peace Prize for its fight for democracy and students’ rights.

Takudzwa Ngdziore is the President of ZINASU; he has been arrested several times for his activism. Recently, he was imprisoned for leading a campaign with other students against a vehicle rental company. The campaign demanded the release of details of suspected state security agents who had hired a car from the company and abducted fellow student activist Tawanda Mucheiwa. Mucheiwa was found heavily beaten and left for dead; he is currently nursing injuries and suffering from trauma following his abduction.

According to Ngadziore, jailing him has had the opposite effect that the government might have desired:

“My detention for over a month has actually strengthened me to continue fighting for the rights of citizens in the country. I will not be deterred and will keep on advocating towards better education and living conditions for all the students in the country. We cannot be living in a society where we as citizens are afraid to express ourselves.”

Ngadziore described his prison experience as a nightmare:

“Zimbabwe‘s prisons resemble medieval dungeons, with virtually poor access to quality food, bedding, and medication. Prisoners are suffering and dying as a result of perennial neglect by the government, and these are serious human rights violations. It is high time that this government supports our prisons, as this is enshrined in the Universal Declaration of Human Rights, to which this same government is a signatory.”

One of the campaigns that Ngadziore leads is mobilizing university and college students to register to vote in the forthcoming 2023 Presidential elections.

“We are targeting university and college students to register to vote,” he says, “because I believe it is the duty of young people to shape the destiny of this country. The youth vote will play a crucial factor in determining the next government in the forthcoming elections.”

And that new government, hopes Ngadziore, will take steps to return Zimbabwe education to something that is valued, not suppressed.