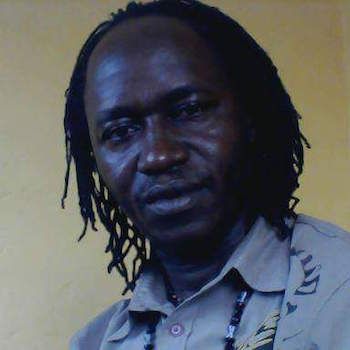 Summary. Theophilus Gbenda is a radio journalist in Sierra Leone who is continually harassed and threatened because of his dedication to representing his people, regardless of the political elite’s responses to his challenges. He has been arrested and locked up several times, his life and those of his family members have been threatened, and he is continually harassed. But Gbenda has resisted all threats, as well as bribes, and remains a trusted source of information and advocacy in the country.

Profile. Theophilus Gbenda’s courage was tested early, during Sierra Leone’s brutal civil war when he was forcefully conscripted and made to fight rebel battalions until, after seven months, he escaped. As a fearless journalist, He’s been arrested, harassed and threatened, once having to move his wife, four children, and two younger siblings to an undisclosed location for their safety. Still, he resists.

Gbenda is a paragon of the courageous journalist, beginning with his first job as a reporter at the Standard Times newspaper, then became Deputy Editor at the Awareness Times newspaper, where he wrote a column called “I Rest My Case”. The column addressed issues of national interest, sometimes from a radical (according to some) viewpoint, and soon became very popular, earning Gbenda the nickname of “More Fire”. Following his stint there, Gbenda was hired as Station Manager at Culture Radio—a Rastafarian-based station running as an NGO and then promoted to Project Coordinator. The objective of Culture Radio, according to Gbenda, is “to promote our culture and to also promote black consciousness so people will become proud of who they are and don’t feel inferior when they see other races. . . . We also believe that there will be no peace without justice, and so we really focus on promoting an enlightened society, because we believe when the people are well-informed about things happening around them, they will be in a better position to make informed decisions.”

At the radio station, Gbenda anchored the “Burning Issues” program and frequently challenged the powers-to-be; one of the “burning issues” was corruption. Soon, especially after appearing on television and receiving awards for his work, Gbenda became one of the most popular—and controversial—journalists in Sierra Leone.

However, with popularity and controversy came severe conflict. The former vice-president of Sierra Leone had him arrested and detained for three days and nights because of what the vice-president claimed was a false report on a land grab; Gbenda was eventually released without being charged. “It was just a matter between me and the vice-president,” says Gbenda, “using the police to get me intimidated.”

He was arrested several more times, once because of a satirical piece he composed for his WhatsApp group and once because of his reporting on what he considered to be a flawed election process in 2012. His opponents also tried to bribe him. “There was a plan to bribe me for the sum of 50 million Leones, plus a Jeep” Gbenda says, “so that I’d actually be on the side of the ruling party. But then I refused; I rejected the bribe. I said, ‘No, I’m not interested in that.’”

In 2017, Theophilus Gbenda left Culture Radio and joined Eagle Radio as General Manager. He is no less aware of his calling and of the dangers of remaining principled:

“The political climate does not favor radical journalism. You either get arrested or get beaten or get killed or whatever. So you should be prepared for any of those. . . . This is what Sierra Leone needs. If the default response from the powerful to speech they don’t like is intimidation and detention, a society has lost a piece of its freedom of expression, and along with it, its soul.”